The derby of the north: Lille vs. Lens

LOSC Lille and RC Lens meet on Sunday in the first 'Derby of the North' in over five years — ligue1.com takes you inside one of Ligue 1 Uber Eats' feistiest, most passionate regional encounters.

Lens were already condemned to the drop by the time they made the short trip to the Stade Pierre Mauroy. They made a great start though as Pablo Chavarria gave them a 24th-minute lead but Sofiane Boufal levelled four minutes before the break. Djibril Sidibé (74') and Divock Origi (90') ensured the points stayed with the hosts, and Lille fans have had uncontested regional bragging rights ever since.

WATCH: What happened in the last Derby of the North

Lens have picked up just three points in the ten top-flight derbies since they took apart their neighbours in the late stages of the 2005-06 season. With a midfield of Alou Diarra and Seydou Keita, and with Vitorino Hilton in the back four, the hosts were 3-0 up by half-time thanks to goals from Olivier Thomert, Daniel Cousin and Keita.

Pierre-Alain Frau, who would go on to play for LOSC later in his career, struck early in the second half, sandwiched in between goals from Peter Odemwingie and Abdul Kader Keita as Lens claimed a famous win, their first over their neighbours in more than three years.

Excelsior Roubaix had met cross-town rivals RC Roubaix in the first 100% northern final in 1933, the region's two premier clubs now provided the second at the Stade Olympique Yves-du-Manoir in Colombes in the Paris suburbs.

They served up a thriller in front of more than 60,000. Lille, who had just missed out on the league title, were in their fourth successive cup final, and twice took the lead through Roger Vandooren and Jean Baratte. But Lens pegged them back thanks to goals from Stefan Dembicki, known as 'Stanis'.

It took a stunning individual goal from Baratte to decide it four minutes from time to complete a hat-trick of Coupe de France final wins for Les Dogues. The highest scoring derby came as an early Christmas present for Lens fans. Believe it or not, it was only 1-0 at half-time: Guy Lacombe, the former Paris Saint-Germain and Stade Rennais coach, giving the hosts the lead on 22 minutes.

You have to wonder what the half-time team talks were like, because the game exploded in the first 15 minutes of the second half. On the hour mark, it was 3-2 with Lens' François M'Pele and Lille's Pierre Pleimelding exchanging braces of goals.

Pleimelding would go on to complete his hat-trick with a late penalty, but that only pulled it back to the final scoreline as Yves Ehrlacher (76') and Henryk Maculewicz (80') had already given Lens an unassailable lead.

Lens had played LOSC's forerunners Olympique lillois and SC Fives a number of times before LOSC was created in 1944, and the Second World War was still ongoing when the two clubs in their current format met at the Stade Henri Jooris, LOSC's former home, demolished in 1975.

It was not much of a contest with Lille two goals up inside 12 minutes thanks to René Bihel and Jean Lechantre. Bihel —nicknamed 'the Norman bull' in reference to his muscular playing style and region of birth — would complete his hat-trick either side of half-time. He scored again when Lens took the honours in the duo's second-ever derby just over two months later. 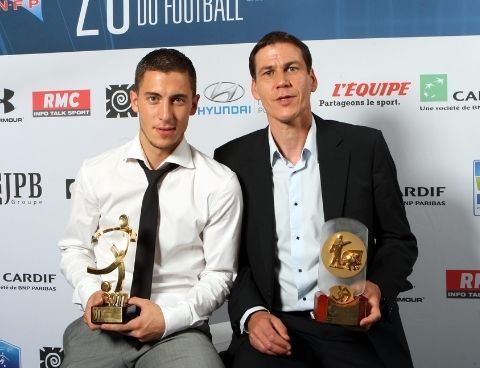