With six goals to his name since the turn of the year, Terem Moffi is scaling new heights as the driving force behind FC Lorient's survival bid…

The Nigerian forward arrived in France from Belgium at the start of the season as a relative unknown, but his prolific streak has thrust him into the limelight - more than he could ever have imagined.

"My brothers sent me a picture for the highest goalscorers in 2021, I saw my name with Luis Suarez, Lewandowski, Messi, and I was like 'how is this even possible?'," Moffi explained to the Ligue 1 Show on beIN SPORTS.

"It's been surreal so far to be honest. The first couple of games, it was quite difficult adapting to the language, the style of play and to everything actually, but from then new year it's been a different side of Terem Moffi, a guy who is just enjoying his game and playing football!"

The 21-year-old scored on his Lorient debut in October, helping his side to a 3-1 win over Stade de Reims, but the goals then dried up, and Moffi struggled to hold down a starting spot. It took a couple of months for the Nigerian to acclimatise to the demands of playing in Ligue 1 Uber Eats.

"In the first few games, I think I was being knocked off the ball easily," Moffi explained. "I didn't like it, the coach didn't like it, my dad didn't like it so it was 'you have to work on your strength and learn how to use your hands to guide the defenders, and keep the ball', so I mean I'm not perfect at it yet, but I really improved on it! I try to lift more weights to help my strength, and my body weight not easy to be shaken off and stuff like that!

"Against Nice, the last game before the Christmas break [a 2-2 draw at the Allianz Riviera], after I scored this goal there was this calm, I felt like 'yeah this is the Terem Moffi you've known all your life who plays football with a smile on his face, who goes on the pitch to enjoy himself'"

Moffi went on to net in Lorient's first four matches of 2021, including a historic winner in the shock 3-2 victory over Paris Saint-Germain, which further shone the spotlight on his talent.

"In the first leg in Paris [which PSG won 2-0], I had a similar chance and it came off my shin and just went into the goalkeeper's hands so, that night I spoke to my dad and my brothers and they said 'you had so much time and space, why didn't you take your time and just pass it in?' so when it happened this time, from the middle line as soon as I got the ball, all that was ringing in my head was 'easy, you've got time, you're in good scoring form, your confidence is high, just take it easy!" he continied.

'Goalkeeper made it easy'

"To be honest the goalkeeper made it easy for me, because no disrespect to him but the space was so much on his right-hand side, so I just passed it in!"

Such was the joy of scoring against the nine-time defending champions of France, Moffi's trademark gymnastic celebration very nearly went wrong.

"I was so excited just like, get into the celebration with the team so I think I miscalculated. I've been banned actually!" he laughed. "It depends [whether we'll see it again], it depends. I've been flipping since I was a kid so it's just instinct, it just happens!"

As well as entertaining fans with his summersaults, Lorient's eight-goal top scorer has proved he has all the foresight and quality to reach the very top level.

"I kind of know how to read the game and take the opportunities," Moffi explained. "So when you make a mistake, I'm always there to take on it. So I'm always like, calculating what he's going to do, does he have a chance to play it back, play forward and be ready to pounce. So when it happened, I was like 'thanks God, this is for me!'"

Playing with a smile

Foresight, quality, but also improvisation. A skill that could have led to a wonderful back-heeled goal in the 2-1 loss to Girondins de Bordeaux in January.

"Ooooh, if only, that would have been the Puskas award winning goal!" said Moffi. "No, I'm joking!"

Moffi's skills were perfected as a child, watching videos of a Nigerian legend, once of PSG. Jay-Jay Okocha's approach to the game has left an indelible mark on the Lorient hitman. 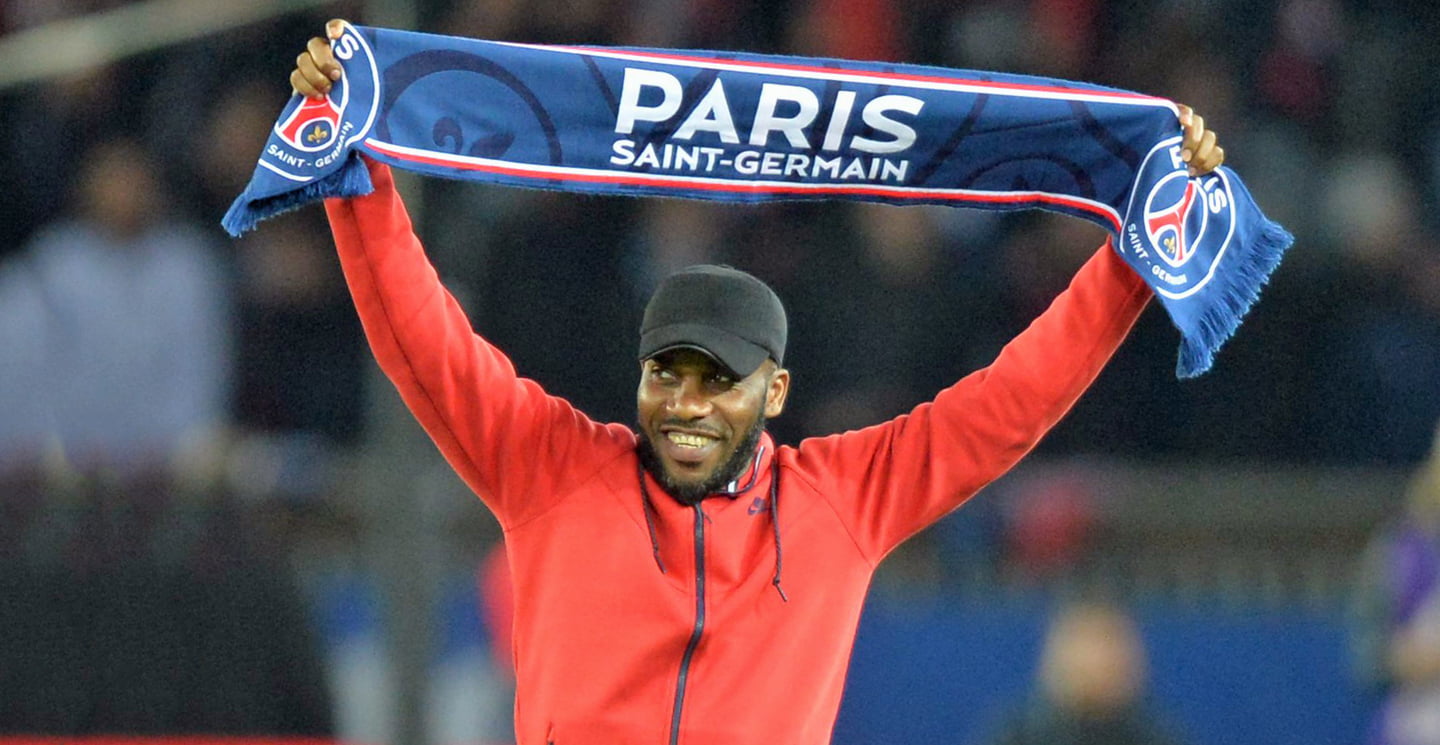 "I met him, and he told me 'football is easy, you don't have to do too much. Just be you, enjoy yourself! He was a fantastic dribbler, when I was younger I used to watch his videos like step-overs and crossovers, it was really a big part of my game but now I'm kind of direct except when I'm in a tight situation I try to dazzle my way through!"

Another Nigerian who lit up Ligue 1 Uber Eats a little more recently was Victor Osimhen. The 13-goal top scorer with LOSC last season, his performances convinced Moffi to follow in his footsteps and swap Belgium for France. 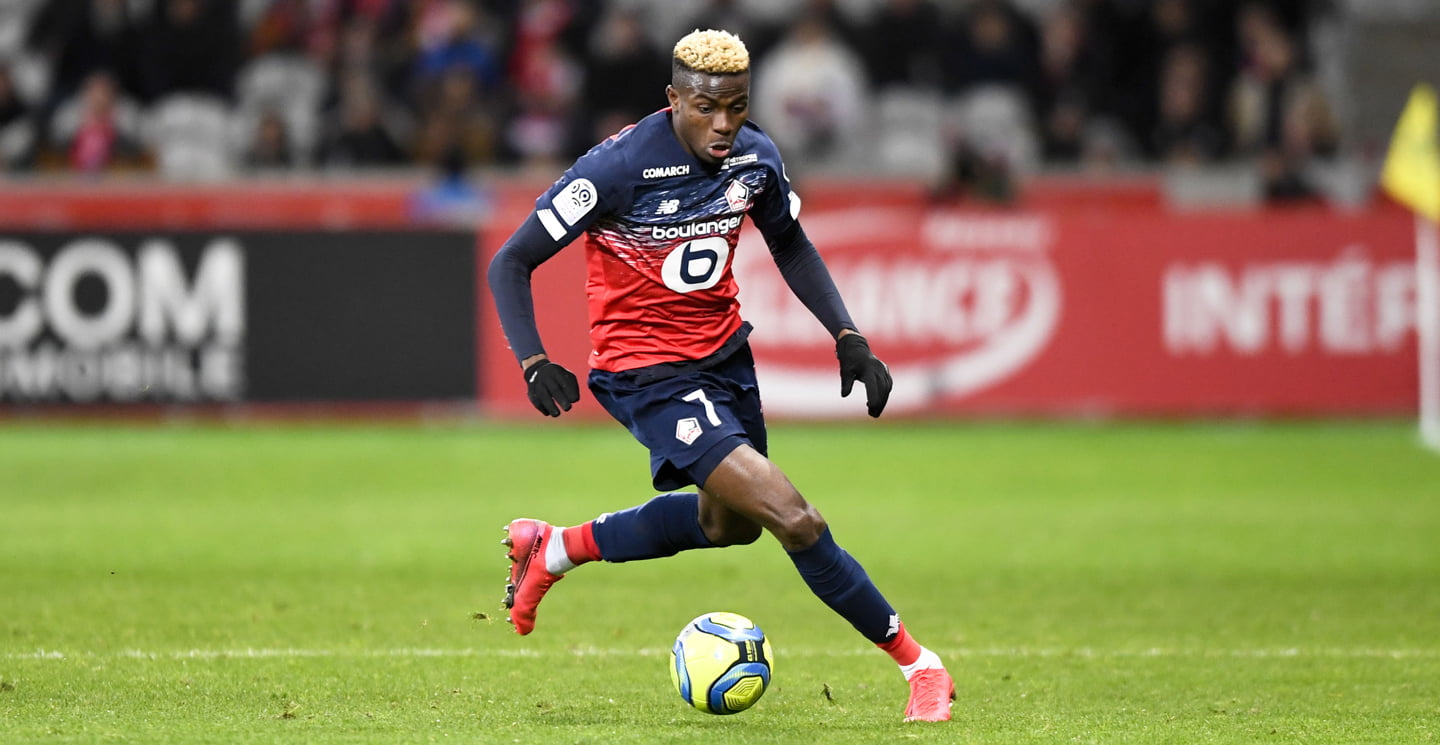 Moffi only needs five more goals this season to match Osimhen's return from his only campaign in France. But rather than go after his compatriot's total, Lorient's smiling assassin plans to con-tinue his relaxed approach, one that has made of him one of the revelations of the season in the French top flight.

"As a matter of fact I didn't set targets for this season," Moffi concluded. "I was like 'go, give your best' but now I think I have surpassed what I was expecting so I just want to continue this way and whatever God says happens, happens. No pressure, just do you!"