Mickaël Nadé’s stoppage-time goal rescued a 2-2 draw for crisis-ridden AS Saint-Etienne at home to Angers SCO on Friday, but Les Verts remain bottom of the table.

Elements of the Saint-Etienne support had called for manager Puel to resign before this game at the Stade Geoffroy-Guichard, which kicked off an hour behind schedule, at 10pm local time, due to incidents involving the crowd.

When the action did start, Angers went in front in the 28th minute as captain Ismaël Traoré headed in a set-piece delivery. The visitors then looked to be out of sight when they doubled their lead in the 56th minute, Angelo Fulgini breaking downfield and exchanging passes with Jimmy Cabot before firing into the net.

However Saint-Etienne were given hope when Wahbi Khazri curled in a free-kick just after the hour mark. They kept going and were rewarded with the equaliser in the fourth minute of added time when substitute Nadé headed in from practically on the line at the end of a goal-mouth scramble.

The ending to the game will make this result feel almost more like a victory for Saint-Etienne, but the reality is that they continue to prop up the division, behind Stade Brestois 29 on goal difference and still without a win to their name this season.

It was thanks to Nadé that another complicated evening for Les Verts at least had a positive ending. The 22-year-old centre-back chose quite a moment, in the 94th-minute, to score his first top-flight goal. Nadé made his debut in the elite aged 18 in 2017 before disappearing from the picture at Le Chaudron. He spent last season on loan at Quevilly Rouen Métropole, helping the Normandy side win promotion to Ligue 2 before returning to Saint-Etienne in the summer and extending his contract.

Unlucky 13: Saint-Etienne have now gone 13 Ligue 1 Uber Eats games without winning, with six draws and seven defeats in that time. They have equalled their worst ever run in the top flight, established between July and September 1988. 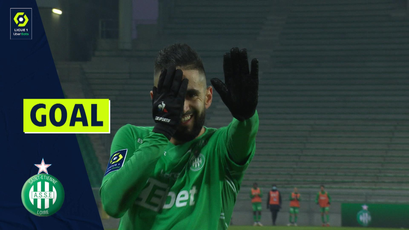