Kylian Mbappé scored twice as Paris Saint-Germain won 4-0 at Nîmes Olympique on Friday to go top of the Ligue 1 Uber Eats table, moving ahead of fellow UEFA Champions League hopefuls Stade Rennais - the Bretons remain unbeaten this season but warmed up for their group stage bow with a disappointing 1-1 draw at Dijon FCO.

The German tactician's hand was rather forced with Marquinhos, Marco Verratti, Mauro Icardi and Julian Draxler among those injured, Layvin Kurzawa and Angel Di Maria suspended and Neymar, who had only returned from South America on Thursday, rested.

Tuchel's problems mounted just five minutes in when Leandro Paredes suffered a thigh injury and had to be replaced by Ander Herrera. When Loïck Landre was then sent off for a rugged challenge on debutant Rafinha just a minute later, the visitors' horizons brightened slightly.

The fact Mbappé, who had scored France's winner in Croatia on Wednesday night, was in the starting XI was another source of optimism, and he sent a header just wide (24') to signal he was alert and a threat.

Baptiste Reynet in the Nîmes goal was also on form though, and he brilliantly turned away an  Herrera header (29') before Mbappé raced clear and fooled the former Toulouse goalkeeper with a fabulous feint before sliding home the opening goal (32').

What a save by Baptiste Reynet! The header by Herrera was goal bound but the @nimesolympique custodian makes a great stop! 🔥#NOPSG pic.twitter.com/lTDGWFhJ7P

PSG would have had other strikes before the break but for Reynet. Alessandro Florenzi fizzed a shot his way (37') before another summer signing, Florenzi's fellow Italy international Moise Kean, also tested the home 'keeper (40').

Reynet then outdid himself by getting down quickly to his right to push out Idrissa Gueye's header (41') and he then kicked away an Mbappé header (43') to keep Jérôme Arpinon's men clinging onto hope at the interval.

Nîmes, who had lost their last three home games to PSG, still had it when Reynet watched Florenzi's volley to Pablo Sarabia's cross strike a post (67'), and the summer arrival from Roma would test the woodwork again: his downward header to Mitchel Bakker's cross had everything but the necessary direction, smashing off the left-hand post this time with Reynet a relieved spectactor (76').

But Nîmes' fortune finally ran out — and Florenzi was rewarded for a fine individual display — when the Italian full-back headed over the line from close range to give the visitors a deserved second (78').

Mbappé then sped clear to bend a shot around Reynet in a virtual carbon copy of the opening goal (83') to repeat the scoreline when the duo met last season. Kean headed off the bar to narrowly miss out on a debut goal (85') before Sarabia added a fourth, drilling in from the edge of the box (88') to help lift PSG ahead of Rennes at the top of the table on goal difference.

It may seem strange to see a goalkeeper singled out when he has conceded four goals, but Nîmes would have been much more soundly beaten if it hadn't been for a superb individual display from their number one. Reynet has, however, now lost 11 of 11 league meetings with PSG, the longest 100% losing streak of any L1 player in the last 70 years. 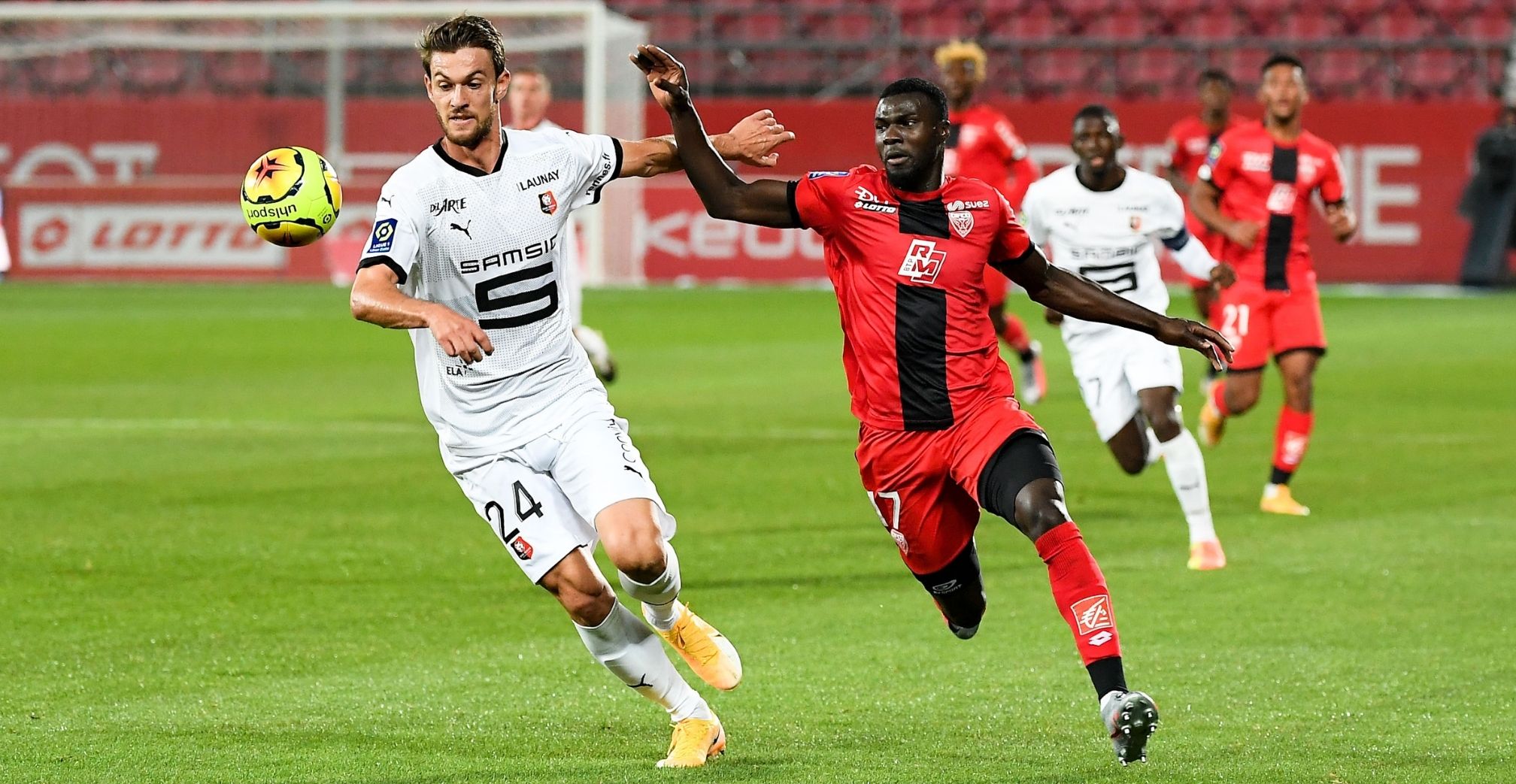 League leaders coming into the game, Rennes were looking for a confidence boost ahead of Tuesday's European tie with Krasnodar. Dijon, however, had won their last four home games against the Bretons.

With Rennes captain Damien Da Silva and FIFA World Cup winner Steven Nzonzi suspended, Faitou Maouassa and ex-Dijon goalkeeper Alfred Gomis injured, and France international Eduardo Camavinga starting on the bench after a busy international break, the hosts must have sensed an opportunity to pick up a first win — or at the very least only a second point — of the season.

Rennes though started well. Sharp and incisive in their passing, Julien Stéphan's men soon made the breakthrough. Clément Grenier, making his first appearance of the season, sent a long ball forward to Hamari Traoré down the left — the Rennes skipper for the night picked out Martin Terrier who sent a low shot beyond Saturnin Allagbé (24'). It was a first Ligue 1 goal in Rennes colours for the summer arrival from Olympique Lyonnais.

With the best attack and worst defence in the league on the pitch, pre-match predictions were looking good, but when Frédéric Sammaritano sent a first-time lob just over the bar of the scrambling Romain Salin, Rennes should have heeded the warning (45').

They didn't, and nine minutes into the second half paid the price. Despite Nayef Aguerd and Daniele Rugani, making his top-flight debut in France, being at close quarters, Mama Baldé burst clear of the defenders and fired crisply past Salin to level (54').

Aguerd, up against the side he left in the summer, might have restored Rennes' lead, but headed a Benjamin Bourigeaud corner just wide of the target (72') while Flavien Tait saw a deflected volley ricochet off the crossbar (84') as Rennes conceded a second successive league draw.