Nice slip up at Troyes

Nice's momentum was rudely halted at Troyes as the newly promoted side scored a 1-0 victory thanks to Mama Baldé's early goal on Sunday.

The visitors had been warned by coach Christophe Galtier that they could suffer in the Champagne region, and the Ligue 1 Uber Eats title-winning boss was proven right.

His former player and assistant coach at Saint-Etienne, Laurent Batlles — now the Troyes boss — took the honours as his side were able to defend their early lead.

Renaud Ripart — picked up from relegated Nîmes in the summer — did the spadework brilliantly, backheeling into the path of Giulian Biancone, and he held off Hassane Kamara to cross with Baldé applying the finishing touch (4').

Kamara's timely block denied Biancone what looked likely to be a second (17') as the league's top defence, which had conceded just four times prior to kick-off, creaked under the hosts' pressure.

Another summer arrival, Adil Rami, made his first appearance for Troyes when he came on for the injured Oualid El-Hajjam (26'); the FIFA World Cup winner joined his teammates in celebrating a wonderful Yoann Touzghar strike (39') only for VAR to rule out the forward's backheeled effort.

Nice finally responded with Kasper Dolberg getting a shot on target (41') and Andy Delort — preferred to Amine Gouiri, who had been nursing a knock picked up with France U21s — then saw Gauthier Gallon box clear his effort (43').

Nice required Walter Benitez to produce a superb save to deny Touzghar (50') as the hosts picked up where they left off ealry in the second half.

Gouiri and Khephren Thuram emerged from the bench (57') as Galtier sought to freshen up his side, but Troyes remained in control: Touzghar bringing another save from Benitez after being teed up by Yoann Salmier (64').

But the efforts of Nice's Argentine goalkeeper to keep his team in the game were in vain as the Côte d'Azur outfit slipped to their second loss of the season while Troyes scored their maiden home success.

The veteran forward was expected to leave Troyes in the summer — if French media are to be believed — but the hosts will be delighted he stayed. He led Nice a merry dance, and deserved at least one goal to cap a superb individual display.

This was Troyes' first home win over Nice in L1 since 16 September, 2006, when Hugo Lloris was in the visitors' goal. 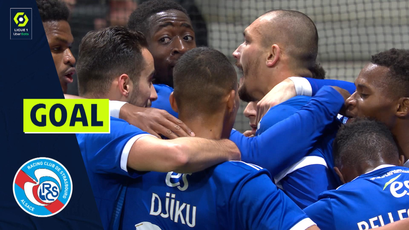