Yann Karamoh struck with the final kick of the game (90+2') as Girondins de Bordeaux picked up a 2-1 win over Angers SCO at their Stade Raymond Kopa on Tuesday.

Angers started the match brightly with Stéphane Bahoken forcing a safe from Bordeaux captain Benoît Costil inside the first ten minutes - les Girondins clearing a corner as far as the Cameroon striker, whose effort was turned around the post for another dead ball which came to nothing (8'). Flavien Tait then threatened the Bordeaux goal after a smart one-two with Baptiste Santamaria, but his shot was deflected clear. Cheikh N'Doye was first to the rebound but his effort flew high above the goal (17'). It was somewhat against the run of play, then, when Bordeaux broke the deadlock. Maxime Poundjé broke down the left before crossing for Samuel Kalu, and he got ahead of Pierrick Capelle to score his second goal in three games (31'). Kalu then came close to doubling his tally after being teed up by Andreas Cornelius, but this time the Nigeria winger's shot was kept out by Costil's opposite number, Ludovic Butelle (41').

Don't look back in Angers

Angers had the chance to restore parity early in the second half after Jules Koundé fouled Romain Thomas in the box, but Costil stood firm to deny Jeff Reine-Adélaïde from scoring the resulting penalty (59'). Reine-Adélaïde forced Poundjé into a last-ditch block (61') before making way for Angelo Fulgini (62'), and Angers' fortunes took a turn for the better soon after, when Pavlovic stabbed home Tait's corner after finding himself unmarked at the back post (64'). Toma Basic blazed a free-kick into the Angers wall at the other end (72') before Pavlovic again came close, with Costil tipping his close-range header over the crossbar (84'). Bordeaux would have the final say, though, with Karamoh capped off a fine counter-attacking move (90+2') to seal a 2-1 win.

Poundjé made a telling contribution at either end of the pitch, setting up the opening goal, stopping what looked sure to be a first-half equaliser for Angers, and generally dominating his left flank. With Bordeaux since he was 11, Poundjé could be a possible captain of the club if he keeps playing like this.

This was Bordeaux's first win over Angers in seven attempted in all competitions. The last time Les Girondins picked up all three points against Les Scoïstes was way back in April 1994, four years before Karamoh was born. Bordeaux went on to finish fourth that season, while Angers were relegated. Bordeaux now have a five-point cushion on Angers, climbing to 11th with this win. 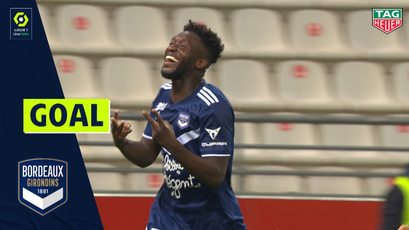