Nantes get better of 10-man Montpellier

This encounter was originally due to be played last month but its postponement meant that instead Montpellier travelled to the Stade de la Beaujoire on the back of an embarrassing exit from the Coupe de France.

Michel Der Zakarian's side were looking to get back on track after their shock defeat away to third-tier Entente Sannois Saint-Gratien. However, their hopes of taking anything from this fixture were dealt a serious blow when Gaëtan Laborde was sent off just before the midway point in the first half.

Laborde, scorer of seven Ligue 1 Conforama goals this season, was shown a straight red card for a high and dangerous challenge on Diego Carlos as the two players went for a 50-50 ball.

Nantes went on to make their extra man count in the second half, taking the lead just after the hour mark when Valentin Rongier's ball from the left found Waris coming in from the opposite side. The Ghanaian took a touch before firing home (62').

Waris had also scored when Nantes won 3-0 away to the same opponents in the Coupe de la Ligue in October. Les Canaris made sure of another victory against Montpellier here as they doubled their lead nine minutes from time. Emiliano Sala headed on a corner and a mix-up between goalkeeper Benjamin Lecomte and Vitorino Hilton meant the ball fell to Pallois, who nodded into an empty net.

Substitute Kalifa Coulibaly had a header tipped onto a post by Lecomte late on as Nantes eased to a second win in as many games in 2019 between league and cup. They are 11th, while Montpellier - who could have gone third with a win - remain fourth.

The former Girondins de Bordeaux striker has been excellent for Montpellier since signing in August, scoring seven league goals. It is worth wondering how this game might have turned out had he not been sent off early on, and the 2012 champions must now face up to being without Laborde due to suspension for their upcoming fixtures.

That is the number of points Nantes have taken, from a possible 15, at home since the appointment of Vahid Halilhodžić as coach. They are unbeaten in their last six home games in all competitions, winning five, and scoring 19 goals in that time. 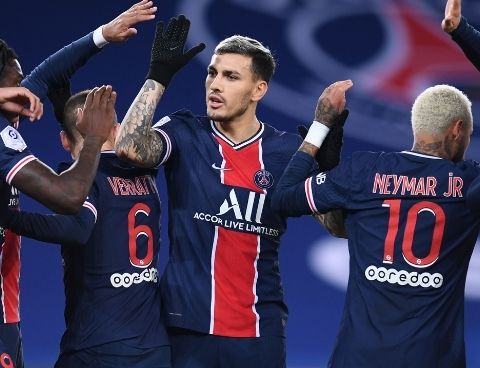