OGC Nice snatched a point from their trip to Stade de Reims on Saturday as Rémi Walter scored a penalty deep into added time at the end of the game to grab a 1-1 draw.

THE MATCH
Nice had picked up just three points in a disastrous December, but had beaten Girondins de Bordeaux in their first league outing of the new year and drawn at neighbours AS Monaco last week, and Patrick Vieira's men might have broken the deadlock had Youcef Atal's shot been either side of Edouard Mendy instead of straight at him (7').

Reims were confident after a five-game unbeaten run, and they soon seized the initiative. Pablo Chavarria latched onto Alaixys Romao's ball before teeing up Rémi Oudin, who slotted a shot between the legs of Walter Benitez (12').

The homegrown talent sent a curling effort just wide as he nearly doubled the lead (21') and Hassane Kamara blasted a shot dangerously close to the target (27') as David Guion's men assumed complete control of the encounter before the break.

Another Kamara blockbuster threatened to break the net but flew wide (50') before VAR made its first significant impact on the game. Mathieu Cafaro thought he had doubled the hosts' lead, but Pablo Chavarria, who had provided the assist, was eventually found to have been offside in the build-up to the goal (70').

Nice rallied on their good fortune. Allan Saint-Maximin headed just over from a Wylan Cyprien free-kick (73') before the latter brought a wonderful stop from the unheralded but consistently excellent Mendy (90+2').

The Reims goalkeeper must have thought he had done enough to secure a tenth clean sheet of the season, but when referee Olivier Thual went across to view the images of Nice's claim that Kamara had blocked an Atal header with his arm, he was only ever going to point to the spot.

Walter, who has proven a cool head in Nice's cup games this season, sent Mendy the wrong way with only seconds left to salvage pride and a point for the visitors (90+9').

THE PLAYER: Hassane Kamara
On another night, he could have been the hero with two ferocious shots that just missed the target, but instead the Reims man cost his side two points. This display, however, suggests he'll make amends for that. 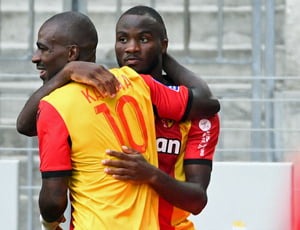