Dembélé: 'Competition has been key at Lyon'

Moussa Dembélé has told The Ligue 1 Show fierce competition for places at Olympique Lyonnais has helped make his first season with the seven-time French champions a major success.

A youth academy product of Paris Saint-Germain, Dembélé's reputation was forged on the opposite side of the Channel as he scored prolifically with Celtic, netting 51 times in 94 outings for the Scottish giants.

That earned him a move back to France last summer, but did not give the 22-year-old any guarantees in the face of fighting for a spot in the starting XI with the likes of Memphis Depay, Nabil Fekir and Maxwel Cornet.

Only 20 of his 32 league appearances this season have been starts, which makes his return of 15 goals all the more impressive.

"Like in every club, we have got real competition for places. Without that competition, you don't progress. It's great to have be part of a talented squad, and that is exactly what we have here at Lyon," explained Dembélé. "The coach makes his choices, and as a player, you have to swallow your pride, accept those decisions and try to change his mind!"

It was outgoing OL boss Bruno Genesio and club president Jean-Michel Aulas who helped make Dembélé's mind up when he had a range of offers last summer.

"The coach and the president convinced me that this was the place for me. This is a club with history," said Dembélé, who signed a five-year deal at the Groupama Stadium.

"Everybody knows that Olympique Lyonnais is a top club, and for me, as an ambitious young player, I could only accept their proposition. I'm delighted be here now and I hope things will only get better!"

With one game left in the 2018/19 campaign, only Paris Saint-Germain's Kylian Mbappé and Edinson Cavani, and LOSC Lille's Nicolas Pépé have scored more goals in Ligue 1 Conforama than Dembélé for whom next season could see him become still more influential.

"His season has been a success, because he's arrived from a league where crosses and physical battles are the main attacking weapons," explained ex-Lyon, AS Monaco and Barcelona forward Sonny Anderson.

"He's arrived at a Lyon side who move the ball around so he's had to adapt his game. The club is lucky to have him. Dembélé has something they were lacking – that killer instinct! For a first season in Ligue 1, it's very good, and very promising." 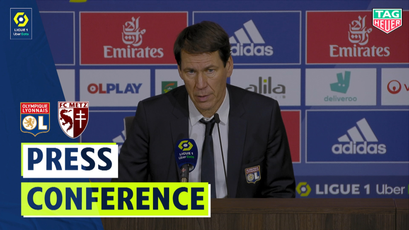