As a youngster, Ferland Mendy used to taunt opponents as he ran past them, and the 23-year-old Olympique Lyonnais full-back has not stopped leaving players in his wake.

"Growing up, when I played football in my area, I would dribble people and beat them with my pace. I used to say 'speed! speed!'. That was a while ago. If I did that now it would just be taking the mick," Mendy told The Ligue 1 Show on beIN Sports.

Named in the Ligue 1 Conforama team of the season in 2017-18 after his first campaign in the top flight, the left-sided speedster has made a name for himself with the same breath-taking speed he exhibits going forward for Lyon.

"That's always been my game, to try to make incisive runs forward. It's my little treat from time to time. I like getting forward, it's natural to me. I enjoy dribbling, and getting involved in attacks, but my main task is to defend. I'm a defender after all, but I love getting forward."

A week before helping Lyon to down Paris Saint-Germain, Mendy went viral when in the 94th minute of OL's win over Amiens SC, he left Alexis Blin gasping for air.

"I saw him coming, and I thought to myself, 'I'll knock it round him'. He blocked me a bit, but I got through anyway. I kept on accelerating and I noticed he looked low on gas, so when he planted both feet in the ground, I dummied to go one way to see if he would react quickly. When I saw he was destabilised, I just pushed on again and left him behind.

"It's good to go on nice runs but I'd rather it ended in a goal. For me, it gives me confidence and allows me do my thing."

After registering five assists last season, Mendy has added goals to his game, contributing two to Lyon's cause this time around. Such is his confidence going forward, he has even found time to prepare a celebration routine, performed with captain Nabil Fekir. "We were warming-up, using rubber bands, and we started doing that for a laugh, so we agreed to repeat it if one of us scored. There was even a game in which he scored, and I scored too, so we did it for each goal. It's been a while now though!"

Such performances earned Mendy a chance to join up with Fekir, and former PSG academy team-mate Presnel Kimpembe, in the French national team in November last year. Coming through the ranks in the capital, the full-back played in the same age group as current Lyon team-mate Moussa Dembélé, but also fellow Ligue 1 stars Kimpembe, Mike Maignan, Fodé Ballo-Toure and James Léa-Siliki.

"It's great to see them because we don't have time to see each other very often, so when you cross them on a pitch it's a nice moment. It's a great feeling to see them playing at this level, I'm happy for them!"

While the Parisian adventure continued for some of his mates, Mendy's was stopped brutally at 16 years old, when a hip infection left him hospitalised and unable to walk. An episode that inspired the teenager to fight to reach the top.

"I didn't play for about eight months I think, then I went back to training as usual and I was rubbish. I wasn't up to it, but I worked really hard, and with time I felt myself getting back to a good level, so I left PSG, and eventually signed for Le Havre. It's behind me now, and it has helped me, it gave me a boost, and gave me character. It made me!

"From time to time, it hits you and you think to yourself: 'Wow, I'm at Lyon now, I'm an international'. It makes me happy, and drives me to take the next step in my career."

With his exciting, attacking brand of football, Mendy has been been compared to another former Le Havre left-back, who in July 2017 became the world's most expensive defender.

"It's true there are a few similarities between us. But I don't really pay much attention to that, I don't think he does either," Mendy said of his namesake Benjamin, the former Olympique de Marseille and AS Monaco man now starring at Manchester City.

"It's easy to compare us because we've got the same surname, we play in the same position.Our styles of play are pretty different, our way of attacking. I'm more of a dribbler - he uses his strength."

Like Benjamin, Ferland Mendy is preparing for a critical month both domestically and in the UEFA Champions League, with Lyon hosting Barcelona on February 19. OL's number 22 just seems to take everything in his stride though.

"I'm always laid back. It doesn't matter who I'm up against, I'll put just as much effort in, so it doesn't change much." 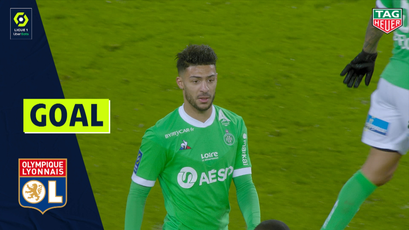