'In our hands' - Sainté out to seal Euro return

AS Saint-Etienne are hoping to secure a return to Europe with a win when they entertain OGC Nice in their final home game of the season at the Stade Geoffroy-Guichard on Saturday evening.

Les Verts suffered a setback in their quest for European qualification when they lost 1-0 at home to Montpellier Hérault SC last weekend, a result which ended a run of seven games without defeat and severely damaged their prospects of pipping rivals Olympique Lyonnais to a top-three finish. It also saw them miss an opportunity to confirm a place in the Europa League at least.

Jean-Louis Gasset's side come into the penultimate round of fixtures four points adrift of Lyon, meaning they must better OL's result against SM Caen if they are to keep alive their dream of Champions League football for another week. However, the priority is securing a return to the Europa League, a competition they last graced in 2016-17, when they reached the first knockout round before losing to eventual winners Manchester United.

Sainté know a win here in front of a big crowd at Le Chaudron will guarantee them a place in the group stage of the Europa League next season, while anything less will leave them relying on Montpellier - four points back in fifth - dropping points to prevent the battle going down to the final day.

"I said last week that we want to secure fourth place," said Gasset when asked if he still thought a top-three place was possible. "If we were playing pétanques, we would say we had three boules left to play. We missed the first one and now we have two more. We were disappointed after Montpellier. It was a blow after our run of six wins and a draw. We need to go again and tell ourselves that this is a second match point in a stadium with our fans behind us. To be able to celebrate European qualification with our supporters is maybe a sign of destiny."

Saint-Etienne were hampered against Montpellier by the second-half sending-off of Rémy Cabella, who was shown the first red card of his Ligue 1 Conforama career. Cabella will be suspended here as a result, and Gasset's options are limited with Mathieu Debuchy and Wahbi Khazri also serving one-game bans - Khazri and Cabella are their leading scorers in the league this season with 21 goals between them.

However, Gasset can welcome back Timothée Kolodziejczak and Romain Hamouma - both players were missing from the line-up last weekend. The coach is optimistic that his team can hold onto the top-four place that they have held for most of 2019.

"We have our destiny in our hands. We need to take advantage of this chance. We couldn't do it last weekend but now we have another possibility to finish the job, to take the club back to where they want to be, into Europe, which is in the club's DNA."

Reports this week suggest Gasset will not decide whether to remain in charge at the Stade Geoffroy-Guichard next season until he knows if his side will be in Europe. If they fail to secure qualification here, they will get a last chance away at Angers SCO on the final day next Friday.

Meanwhile, Nice travel north with the pressure off but with Patrick Vieira hoping to end a promising debut season in charge on a high. Les Aiglons can no longer qualify for Europe themselves, but they are seventh just now and are just two points behind Olympique de Marseille in sixth.

They held Paris Saint-Germain in their last away outing and have lost just once in eight games, although Youcef Atal missed a stoppage-time penalty in a 1-1 draw with FC Nantes last weekend.

Goals have been their problem all season long, with only 28 scored in 36 games so far. Only relegated bottom club EA Guingamp have scored fewer, but their major problem this weekend is at the back, with both captain Dante and his fellow centre-back, Christophe Hérelle, both suspended.

"Like us, Nice are having to deal with some notable absences. We both have injuries and suspensions. Nice will be without their central defence and we will not have our technical leaders. We need to find a system and a line-up that will help us get three points. We might have to play differently. Nice have nothing left to play for but sometimes coming up against a team who are relaxed can be dangerous," warned Gasset.

Vieira, meanwhile, may offer Mickaël Le Bihan another chance up front after the striker made his first start in more than two years last weekend, lasting 71 minutes at the Allianz Riviera.

"I was supposed to take him off after an hour but he was doing fine. He has had an awful lot of quite serious injuries, but he has always worked hard and I am pleased to see him back at this level," said Vieira. 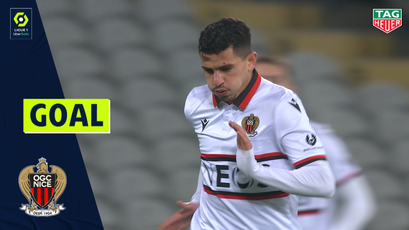