LOSC strengthened their grip on second with a 4-0 win over OGC Nice, with Rafael Leao (7'), Nicolas Pépé (37'), Jonathan Bamba (75') and Loïc Rémy (90+4') ensuring a sixth consecutive win in all competitions.

The hosts came out of the blocks flying at their Stade Pierre-Mauroy, and opened the scoring inside the first ten minutes when Jonathan Ikoné sped past Dante and squared for Leao, who was left with a simple tap-in for his sixth goal of the Ligue 1 Conforama campaign (7'). Ikoné nearly turned provider again soon after, playing Bamba through for a one-on-one, but Nice goalkeeper Walter Benitez reacted quickly to deny the Lille attacker (11'). Pépé, the hosts' top scorer in 2018/19, then drifted past Dante and let fly, but his effort cannoned back off the crossbar (15'). Leao came close to doubling his and Lille's haul for the day just past the half-hour when he got on the end of Zeki Celik's cross, but Benitez blocked the Portugal U21 star's attempt in instalments (32'). Christophe Galtier's side took a deserved 2-0 lead into the interval, though, with Pépé stealing possession from Malang Sarr and steering the ball into the far corner for his 16th goal of the season (37').

Patrick Vieira had been forced into a change of formation when Youcef Attal went off for Myziane Maolida (33'), but whether playing 3-5-2 - as they had for the first-half-hour - or subsequently 4-3-3, Nice had little answer for the sheer pace in the LOSC attack. Ikoné had the visiting defence on the back foot at the start of the second half, but Pépé then uncharacteristically squandered the chance (48'). Nearly an hour was gone before Nice mustered their first chance of the match. Maolida sent the ball into the box for Allan Saint-Maximin but there was too much on the cross for him to connect (54'). Both sides brought on fresh legs for the run-in, Pierre Lees-Melou replacing fellow midfielder Wylan Cyprien for Nice (70'), Rémy taking Leao's place at the point of the LOSC attack (73'), but the traffic continued to flow in the same direction, with Bamba adding a third, latching onto a Pépé pass and this time winning his personal battle with Benitez (75'). Dante deflected a Pépé shot onto the post (85') before Lees-Melou was given his marching orders late on (89'), and there was still time for Rémy to head home a fourth (90+4') as LOSC secured a comprehensive first win over Nice since May 2012.

With Pépé, Ikoné and Bamba all combining pace and speed of execution behind Leao, it almost seems unfair to isolate a single performance, but Pépé simply has a sprinkling of magic dust that delights the LOSC faithful week in, week out. As well as a goal and assist, the Côte d'Ivoire winger won a team-high 18 one-on-ones. LOSC remain on course to make the UEFA Champions League group stages for the first time since 2012/13, and supporters will be hopeful that the nascent 23-year-old will still be around to help them make the most of it.

With 46 points from 23 games, Lille have their best haul at this stage of a season since France adopted three points for a win in 1994. The last time Les Dogues secured as many points outright was way back in 1949/50, when Jean Baratte ended the campaign with 22 goals. Lille were runners up that season… to Girondins de Bordeaux. 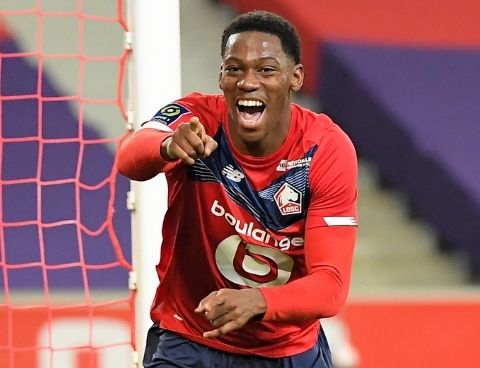 Jonathan David: 'Lille not playing for the title'