LOSC all but guaranteed their place in next season's UEFA Champions League group stage with a 1-0 win over Girondins de Bordeaux. Loïc Rémy got the only goal of the game at the Stade Pierre-Mauroy.

It has been six seasons since Lille last pulled up a chair to European football's top table - Les Dogues qualifying for the group stage in 2012/13 - but they welcomed Bordeaux to northern France with a six-point lead on third-place Olympique Lyonnais and their destiny in their own hands. Paulo Sousa's visitors conjured the first chance, though, but after being slipped in by Jaroslav Plasil, Jimmy Briand fired high of the near top corner before the flag went up for offside anyway (18'). That jolted the hosts into action, and they were a Benoît Costil double-save away from taking the lead moments later, with first Rémy and then Jonathan Bamba denied in quick succession (19'). In an otherwise cautious first-half, it was a moment of magic which broke the deadlock. Jonathan Ikoné feinted a thumping free-kick before dinking a pass over the Bordeaux wall, and Rémy volleyed home on the turn for his sixth - and arguably best - league goal of the season (27'). Jonathan Bamba could have given the hosts a bigger advantage to carry into the half-time break, but his left-footed shot from the edge of the area lacked the power to test Costil (45'+1).

Kings of the north

The second half had an eerily similar start to the first, with Briand threatening first before LOSC drew a collective intake of breath from the visiting fans almost immediately after. Yacine Adli played a slide-rule pass into Briand, but the Bordeaux striker's shot was saved by the legs of Mike Maignan (58'). Moments later, Ikoné fed Nicolas Pépé, but the winger - scorer of 20 Ligue 1 Conforama goals this season - sent the ball wide of the near post on his weaker right foot (59'). Ikoné then floated another free-kick into the Bordeaux area from a deeper position than his first-half delivery, looking for his captain Jose Fonte, but the big Portugal centre-back was unable to make the chance tell (64'). Bordeaux had a half-chance to restore parity when a good team move ended up with Maxime Poundjé on the far side, but the left-back's shot came back off the Lille defence (76'). There was too much on Pépé's late pass for Bamba to add gloss to the scoreline (84'). The Ivorian caused havoc until the very end, though, Pablo sent off for bringing him down when he was clean through (88'). Pépé thenfired the resulting free-kick over (89'), and it ended 1-0 with the Lille fans in full voice, celebrating what is almost certainly a second-place finish.

Rémy has had to share centre-forward duties with Portuguese pair Rafael Leao and Rui Fonte since signing for Lille from Las Palmas last summer, but the 32-year-old has never looked more up for the battle than he does now. Rémy was a handful in the final third, completing an impressive 83 per cent of his passes, while his beautifully taken volley was his third goal in as many games.

Lyon could whittle LOSC's lead on them back down to six points with victory over Olympique de Marseille in Sunday's late kick-off, but with only six points left to play for after this weekend, and with Lille's vastly superior goal-difference - +32 versus +15 as it stands - Christophe Galtier's men will almost certainly join Paris Saint-Germain in playing in next season's UEFA Champions League without needing to negotiate the third qualifying round. 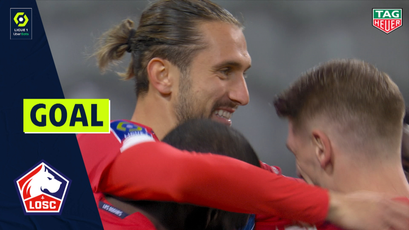