Julien Stéphan has had a big impact at Stade Rennais FC since his appointment in early December - he takes his team to the Parc des Princes on Sunday evening...

On December 5, an out-of-form Rennes finally got back to winning ways, ending a barren run by defeating Olympique Lyonnais 2-0 at the Groupama Stadium. For the newly appointed coach Stéphan - who had replaced Sabri Lamouchi - it was the ideal start to life in the dugout.

"It all happened so quickly and, for me, it was totally unexpected. Twenty-four hours earlier I was coaching the reserves in the 6th division, and then suddenly I was in the hot-seat. At times like that you just have to take responsibility, you have to rise to the challenge that the president has given you. I wouldn’t say I’m living a dream, but it's certainly a great story to start out here, at a club that means so much to me," Stéphan told The Ligue 1 Show on beIN Sports.

At 38, Stéphan is the youngest coach in Ligue 1 Conforama, but the highly-rated trainer has had to work hard to land the top job at his local team.

"This town holds great importance to me for many reasons. I was born here, my son was born here too. And this is where I've been able to progress in my profession," he said.

"I've been at the club for seven years. It's a great feeling for me to be the head coach of Stade Rennais and I'm hugely determined to do a good job every time I come to work."

Stéphan may be a novice but he can count on the support and advice of his father, Guy Stéphan, the assistant coach to France boss Didier Deschamps and a recently crowned world champion.

"I speak to him regularly on the phone, but that's something I did even before my appointment. I can use his experience to help me. He was also a young coach in Ligue 1 once upon a time, at Lyon and at Bordeaux. I like discussing things with him, sharing my experience. That has to be helpful. But my situation is a bit different, we have different personalities too. Our career paths haven't been the same, but of course we have a lot in common and I talk to him almost every day."

Calm and composed on the touchline, Stéphan oversaw four straight league wins without conceding a goal during his first month at the helm, the best start by a Ligue 1 coach for 40 years.

"I adapt to the players I've got. If I had to cite a model I'd say Guardiola's Barcelona - their collective pressing game, super-fast transitions, possession football, for me that's the ideal way to play. But there's always a difference between what you want to do and what you're able to do. But that's the way I see football - you have to be well organised and able to defend well in order to attack."

In terms of attacking, Stéphan can count on the mercurial forward Hatem Ben Arfa. Inconsistent under Lamouchi, the France winger has rediscovered his top form in recent weeks.

"When you're lucky enough to possess a player of Ben Arfa's talent you have to give him the best possible chance of expressing that talent. That's what we've tried to do from the very first matches. We've told him he's an important player for us but that he also needs to take responsibility. It's one thing to show faith in a player, the player also needs to be able to respond to that. He rose to the challenge straight away and hopefully he'll keep his good form up."

Can the good run continue?

Rennes have slowed down a little in 2019, taking just four points from their last three games, yet Les Rouge et Noir remain within touching distance of the European places. They also remain in contention both in the Europa League and the Coupe de France, as the Brittany side continue to go in a search of a first major trophy since 1971.

"Our good run in December took us up to the top third of the league. Our goal is to stay there now, and why not finish even higher up. It's a very close league with a lot of quality teams. I'm a competitor so I want the best results possible. How far can we go? I don't know...Can we win a trophy? Can we establish ourselves in the top part of the table? Only the future will tell us and there's still a long way to go." 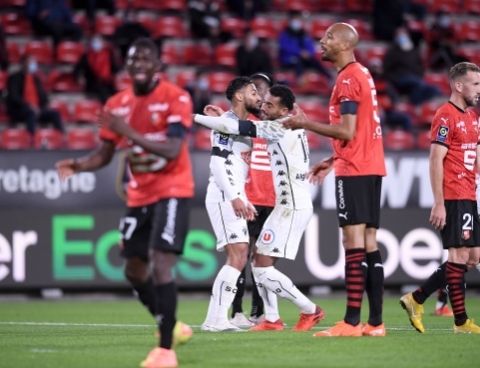