PSG have wrapped up an eighth Ligue 1 Conforama title, claiming the 2018-19 crown with six games to play. From Kylian Mbappé's goals to Angel Di Maria's inspiration, ligue1.com runs through the reasons for their triumph.

The 20-year-old continues to go from strength-to-strength. After claiming the FIFA World Cup with France last summer, Mbappé has produced the best season of his career to date, smashing his previous best goals tally of 15 that he recorded for former club AS Monaco in his breakthrough 2016-17 season.

A brace in his opening game of the campaign - the 3-1 win at En Avant Guingamp in Week 2 - set the tone for a fruitful season in which his four-goal haul against Olympique Lyonnais in the 5-0 victory in Week 9, and his nine goals in a stunning streak of scoring in seven successive matches - one shy of the Paris Saint-Germain club record - were just some of the many highlights.

He could still become the first Frenchman since Jean-Pierre Papin in 1989/90 to reach the 30-goal mark for a Ligue 1 Conforama season.

"He's the best signing the club has made since I have been here," said Dani Alves of the German coach recently. "He's the most intelligent coach I have had." Given the Brazil international has played under Pep Guardiola at Barcelona and Massimiliano Allegri at Juventus, that is high praise indeed.

Tuchel's touch has been to bring a swagger and style to PSG's play, helping them score the most goals in the division while also keeping them virtually watertight at the back.

Though the Coupe de la Ligue and UEFA Champions League challenges ended in disappointment, the league title is in the bag, and the Coupe de France could follow to complete a domestic double, though Stade Rennais FC will have something to say about that in the final at the Stade de France on 27 April.

It certainly helps when you set out to be league champions to make a strong start. 'Strong' is a major understatement when you are talking about PSG's 2018-19 opening streak.

No team since Tottenham Hotspur in 1960-61 had managed to go 11 games unbeaten from the start of a top-flight season in one of Europe's top five leagues.

PSG eased past that landmark with their 2-1 win over LOSC Lille - "one of our best performances of the season", according to Tuchel - and then stretched the record to an incredible 14, leaving them 15 points clear of the chasing pack even at that early stage.

They dropped their first points of the season with the 2-2 draw at Girondins de Bordeaux in Week 15, but their stunning string of wins had already more than laid the groundwork for title number 8, pulling them level with FC Nantes and AS Monaco on the French top-flight's all-time list.

4) An Angel from Heaven

If Mbappé got credit for scoring the goals, Angel Di Maria should take the plaudits for creating so many. He made four of the forward's strikes, and took his assists tally into double figures for the first time since his first campaign in France, the 2015-16 season.

"He's top, top, top," said Tuchel of the Argentina international, who helped fill the creative void left by the injury to Neymar Jr. in the second half of the season.

Prior to the trip to Lille, he had been involved in ten PSG goals - scoring six of them - in just eight league matches, including his showstopping display in Le Classique in which he had a hand in all three of his team's strikes against their arch-rivals, Olympique de Marseille.

Despite the forward-thinking players grabbing most of the limelight, they could not have done so without knowing things were tight at the back for most of the season.

PSG have conceded only 26 goals in 32 games, fewer than anyone else, and that is despite letting in 10 in their last three matches. That has been thanks in large part to captain Thiago Silva playing some of the best football of his career.

'O Monstro' has not been alone in being impressive though. Alphonse Aréola and Gianluigi Buffon have formed a formidable goalkeeping tandem that has performed despite Tuchel rotating the pair in and out of the side. Presnel Kimpembe has continued his development alongside Silva while on the flanks, summer signing Juan Bernat in particular has been a key contributor.

Credit must also go to the midfielders, who - following Thiago Motta's retirement and Adrien Rabiot's ongoing dispute with the club - have been stretched, but Marco Verratti has excelled alongside Marquinhos and/or Dani Alves as Tuchel has made do and more with the means at his disposal to forge a title-winning side.

Top 10 individual stats of the season 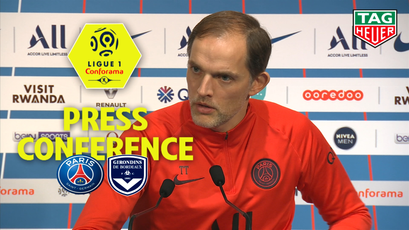