Plenty of players have scored 50 Ligue 1 Conforama goals in their careers, but none have done so as quickly as 20-year-old Paris Saint-Germain prodigy Kylian Mbappé, who hit the half-century mark just his 88th appearance in France's top flight.

In the injury absences of Neymar and Edinson Cavani, the the Ligue 1 Conforama top scorer (22 goals) has shouldered the goal-scoring responsibilities in Thomas Tuchel's side, and he once again obliged with a double in the 3-0 win over Nîmes that took the capital club 17 points clear (with match in hand) on Saturday.

"Everything that Mbappé does, it's dangerous, it makes a difference," said circumspect Nimes boss Bernard Blaquart, whose side slip to 11th. "He created a lot of chances and scored from two of them. He's always on the boil. It's impressive. He's so quick. He's a phenomenon of French football, and it's going to last a while."

Meanwhile PSG boss Thomas Tuchel - who will likely still be without Neymar and Cavani for the UEFA Champions League last 16 return leg clash at home to Manchester United looming on 6 March - was very happy with the win.

"We could have won by more. Kylian could have scored five goals! It was a great win. The team got stronger and stronger as the game wore on," he said before turning his attention to their mid-week Coupe de France quarter-final."Now we want to beat Dijon in the Coupe de France. We haven’t forgotten our elimination in the Coupe de la Ligue against Guingamp. We need to stay calm, stay professional and be ready for Tuesday. It’s a very important match for us."

It has been an up-and-down season for Monaco - to say the least - but on Sunday night the principality club put the emphasis on the upswing as they claimed just a third home win of the season. That they did so against high-flying Lyon, 2-0, was a testament to how much the side has changed since the winter transfer window - with the notable arrival of livewire Portuguese forward Gelson Martins - and the return of coach Leonardo Jardim.

"It was very important to win as we need all the points we can get. Against a top-quality side, who have shown their quality this season against the likes of Paris Saint-Germain and Manchester City, we had a great attitude but also played some great football," said Jardim, who has guided Monaco to an unbeaten run in February (three wins) that has taken them five points clear of the drop. "When I signed with the club, the plan was to play on a par with the best teams in France for the remaining 16 matches of the season. We've done it over four matches so far, but we need to continue."

OL boss Bruno Genesio, meanwhile, who saw substitute Memphis Depay miss from the penalty spot, knows his side need to do better if they are to hang onto third.

"We completely blew it in the first half. All of us! And me the most of all. Was this a hangover from the Barcelona match [0-0 in the UEFA Champions League last 16 on Tuesday]? I don't know," he admitted. "But if we want to be competitive in the race for a top-three finish, and in particular second place, we need to show a lot more spirit. We didn't see the real Lyon tonight."

Happily for OL, second-placed LOSC only went a single point further ahead after an Anthony Gonçalves strike cancelled out Jonathan Ikone's fine strike in the 1-1 draw in Strasbourg on Friday night. However, Sainté's 1-0 win in Dijon will have rung some alarm bells in Lyon, Serbian defender Neven Subotic's lone strike taking Les Verts fourth - within three points of their bitter Rhône derby rivals.

Fresh from a stunning 6-4 aggregate win over Real Betis to qualify for the UEFA Europa League last 16, Rennes clinched a 1-1 draw at home to a resurgent Marseille - despite being without star playmaker Hatem Ben Arfa, left out of the side after missing a pre-match team meeting.

The draw leaves OM in fifth, locked on 41 points with Stade de Reims, who capped their own strong recent run of form with a thrilling 4-2 win over Montpellier. Soundly beaten 5-1 by Paris in mid-week, Michel Der Zakarian's side opened the scoring, but the Champagne club ran away with it in the second half, Rémi Oudin notably nabbing his second Ligue 1 Conforama double.

Bottom club EA Guingamp struck a blow in their bid to beat the drop, Lucas Deaux's last- gasp goal handing Jocelyn Gourvennec's side just a fourth win of the campaign - 1-0 over Angers - and taking them within two points of a play-off berth in a log-jammed bottom end of the table.

Toulouse and Caen locked horns but came out honours even - thanks to a superb leveller from TFC's free-kick maestro Max-Alain Gradel - while stopper Nicolas Pallois clinched victory for Nantes against former club Bordeaux, volleying home powerfully at the far post to get Les Canaris back to winning ways after their Week 25 defeat to Monaco.

Garcia: 'Do everything we can to score' 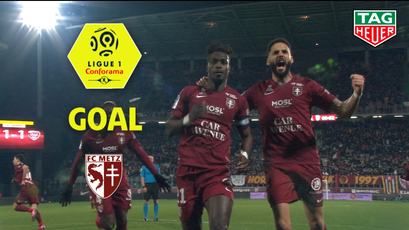