OM boss Rudi Garcia was thrilled to see his side move second with a 4-0 thumping of pointless Guingamp but warned that consistency will be key if they want to stay in the upper reaches of the Ligue 1 Conforama table.

Rudi Garcia (Olympique de Marseille coach): "Stringing the wins together has taken us to second. Getting there is one thing, but staying there is another. We'll soon find out, as we travel to Lyon on Sunday. We'll need to stay on our toes, because if we play against Lyon as we did in the first half tonight, we'll come back empty handed, that's obvious. We only played one half tonight."

Antoine Kombouaré (EA Guingamp coach): "You can't have any regrets when you cop a 4-0 hiding. It has been a terrible night for us. Working hard for two weeks over the international break permitted us to resist for 60 minutes, but then were too fragile. Once we conceded an avoidable goal, doubt crept in and Marseille didn't need a whole lot of chances - their first two on-target shots turned into goals."

Miguel Cardoso (Nantes coach): "I checked the numbers before I got here. We had 11 shots at goal, seven of them on target. We controlled the game from the first minute to the last. Only one team set out to win and that was us. I knew Reims would be super defensive. We needed to be clinical and it's unfortunate we couldn't find a goal. It would have changed the game."

David Guion (Reims coach): "I knew I had a disciplined, well organised team, and they showed me this once again. We knew very well that if we play at Nantes, a very attacking team, that we needed to be compact. The gameplan was adopted perfectly. In the final 15 minutes we could have hit them on the counter and it's unfortunate that we didn't."

Éric Bedouet (Bordeaux coach): "At home, yes, it's a poor performance. We knew Nîmes would be difficult, still on a high from their promotion. The players played hard but we must manage our games better than that. We have little things to improve and it's in training where we'll address that. Being 19th isn't nice, I would have preferred to take all three points, but we have to keep our heads up."

Bernard Blaquart (Nîmes coach): "We have to pick up points any way we can. It's reassuring as a coach to know that you have a team that can score and get back into matches. This group have been together for several years and spend a lot of time together off the field. We play football to win and to let go, be happy. I would like some of them to improve further. Not everyone has fulfilled their potential."

Michel der Zakarian (Montpellier coach): "That's the second time we have conceded a goal at the end of a game. Against Dijon, we conceded a goal from a corner. This time, we let our concentration slip when there was a free-kick in the middle of the pitch. We didn't mark up when the cross came in. We have a really hard time learning our lessons. When you drop two points thirty seconds from time, it's of course very disappointing. By changing the system, I wanted to test something to try and win a home game. We weren't good in winning the ball back in the first half. It didn't meet my expectations. You have to deserve to win a match."

Thierry Laurey (Strasbourg coach): "It deserved that we picked up a point in the last seecond. It does us good. We had a major lapse of concentration for their goal. To keep Montpellier in check, you have to be aggressive in midfield, so we strengthened the spine. But the system you play doesn't prevent you conceding a goal from a set piece. I'm happy when you call on players to set the tempo and they do positive things. At half-time, I was happy it was 0-0. The defences had the upper hand, but Montpellier's opener forced us to take more risks."

Christophe Pelissier (Amiens coach): "There's a lot of disappointment this evening. Unfortunately, we lost Alexis Blin, who gave us more balance in midfield, early to injury. After that, our defence was no longer protected. You can't take anything away from the Lille attack, they performed well. This Lille team will no doubt challenge near the top of the table. I have no complaints about the defeat. We would have needed to have been 110 per cent to hope for something."

Christophe Galtier (Lille coach): "It's a deserved win, though we didn't do well in the final 15 minutes, that's where we have to improve. When you lead 3-0 quarter-of-an-hour from time, you have to handle things better. Nicolas Pepe was actually very much under the weather. He was a doubt right up to the start, but he was very good and created a lot of chances. He also showed a lot of cool with his penalties. It's not important that we're second right now. We want to ensure the team isn't in danger of the drop and get ourselves into the top 10 to hopefully finish even higher."

Alain Casanova (Toulouse coach): "We're happy with the point. I'm very proud of my players. We started really well, were better than Monaco for 30 minutes. They came back well, we went behind, but my team refused to lie down. We reacted with pride, and that's very important for the rest of the season. We still have work to do in terms of our play, but I really liked their attitude."

Leonardo Jardim (Monaco coach): "Our aim was to win, and so in those terms, it's negative. But I'm very happy with the attitude. The players gave their all. For Tuesday, against Atletico Madrid, we have to keep the same attitude and be more precise technically. Whether we're ready or not, we have to play that game and our aim will be to win, because we want to qualify."

Stéphane Moulin (Angers coach): "It's a deserved win. We scored three nice goals and not from set-pieces. I say that because I hear often that we only score from set-pieces. We have proven that we know how to play football. We controlled things, and weren't in danger in the second half. I think we could have scored one or two more goals. My team quickly fell behind and was able to react thanks to their mental strength."

Olivier Dall'Oglio (Dijon coach): "We made a mess of the game. Angers deserved their win and could have score more goals. Apart from the first ten minutes when we scored quickly, there was nothing. We didn't play with each other. I had put in place a tactical system based on possession against a solid and athletic team. I made a mistake. We conceded three goals in less than 20 minutes and there was no reaction until the end of the first half. After that? Nothing, but I'll draw conclusions from that."

Fabien Mercadal (Caen coach): "It's a feeling that we have already had, pride and frustration at the same time. We know that there are things you can and can't control in football. We're happy with what we did, and we're going to rely on that to win other games."

Bruno Genesio (Lyon coach): "The moral of this game is that regardless of the competition, there are fundamentals to be respected. This evening, we forgot some of them, which meant we couldn't win the game. Commitment, determination, intensity, Caen had them, we didn't. I'm more than disappointed. I'm very disappointed, I'm very annoyed, because the game went just as we had envisaged and planned for. We were lucky to lead at half-time, which wasn't a miracle but almost. We were dominated in far too many areas today. If you're not able to play well before and after European games, you should stop. They're fake excuses."

Patrick Vieira (Nice coach): "I liked my players' attitude. We kept going after falling behind. I like their mindset and it's a continuation of what we showed against Lyon [Nice beat OL 1-0 before the international break]. Rennes re a very good team, very well organised, and it was difficult. The have fast players in attack but we stayed organised."

Sabri Lamouchi (Rennes coach): "This was a pretty poor performance from us, unlike Nice, who got things right in the second half. If we can't win this game then at least we mustn't lose it. It's unacceptable to be so wasteful in possession. We lacked balance."

Thomas Tuchel (PSG coach): "[Neymar and I spoke yesterday]. I told him he wouldn't play and he couldn't train, but he felt good and did the whole session. But he didn't sleep well and when I asked him if he was ok in the morning he replied that he 'didn't know'. That was an alarm bell for me. He played 90 minutes with Brazil the day before. I didn't want to take any risks and we decided together that he wouldn't play."

Jean-Louis Gasset (Saint-Etienne coach): "The scoreline is hard for us, especially given our first half. We had chances and Paris didn't, until Julian Draxler's great finish. Mentally we let go a bit, perhaps physically too. We know Paris are stronger than us but four goals is harsh. This is our first defeat of the season and we'll work hard to prepare for our coming games." 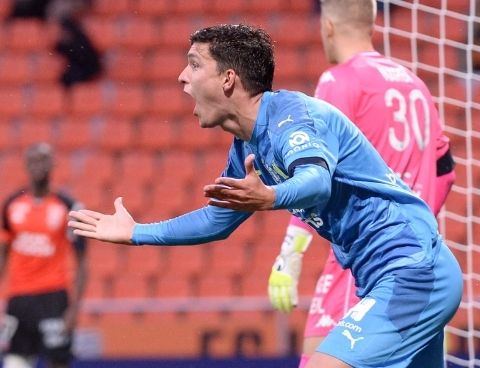 AVB: 'Balerdi will become one of the best centre-halves'