Jimmy Briand got the last of the goals as EA Guingamp claimed a comprehensive 4-0 win at home to struggling ESTAC Troyes on Saturday.

Antoine Kombouaré's Guingamp side were looking to build on their 2-1 win at home to Girondins de Bordeaux last weekend and make it back-to-back victories at the Stade Municipal du Roudourou.

They went ahead midway through the first half. Clément Grenier, scorer of the opener last weekend, could claim an assist as his corner from the right came all the way to the back post, where Nicolas Benezet was on hand to score with a first-time finish (23').

Ludovic Blas came on for Moustapha Diallo at the halfway stage and it was the young substitute who doubled Guingamp's lead in the 48th minute. Etienne Didot's right-wing cross was deflected towards the near post where Blas was thwarted initially by Erwin Zelazny. However, Blas managed to force the ball home at the second attempt for his first goal since the opening weekend of the campaign.

Any doubt as to the final outcome was ended with 10 minutes left, as Didot burst into the box and saw his shot saved by Zelazny, before Yeni Ngbakoto turned in the loose ball.

There was still time for skipper Briand to run through and finish with aplomb to make it 4-0 at the death for his first goal in 2018.

After a miserable March in which they suffered three straight defeats, Guingamp have started April with a bang and this victory takes them past the symbolic 40-point mark as they target a top-half finish.

In contrast, Troyes are now seven games without a win, with just one goal scored in that time. They remain in the relegation play-off place, still a point from safety.

The former Olympique Lyonnais midfielder came to Guingamp to revive his stalling career and it is a case of so far, so good. Grenier scored against Bordeaux last weekend and here he provided the assist for Benezet's opener as the Bretons surely ended any doubt as to their top-flight future and stayed on course for a top-10 finish.

Seven games without a win for Troyes, with just one goal scored and two points gained in that time. Jean-Louis Garcia's side remain in the bottom three, but at least there was good news from elsewhere as relegation rivals Toulouse FC and LOSC both lost as well. It is also seven Ligue 1 Conforama goals this season for Jimmy Briand. 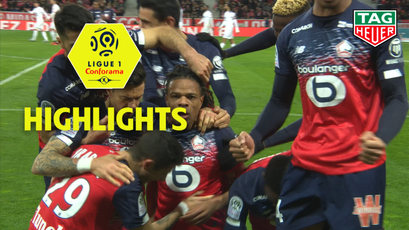