Olympique Lyonnais made it six Ligue 1 Conforama wins in a row as they swept past Dijon 5-2 to boost their chances of finishing third - or better - in the table.

The six Ligue 1 Conforama meetings of the two clubs have now seen 32 goals. A high-scoring, entertaining encounter had been predicted by OL coach Bruno Genesio and he was proved right. As well as moving three points clear of Olympique de Marseille, OL enhanced their goal difference advantage over OM. OL are now a single point behind second-placed Monaco.

OL opened the scoring (4') when Rafael's powerful cross after holding off Oussama Haddadi was volleyed home left-footed by a Memphis Depay in red-hot scoring form. Baptiste Reynet saved well from Ferland Mendy (15') and Dijon equalised (26') when Naim Sliti advanced from deep, skilfully took Lucas Tousart out of the equation and finished in style into the bottom corner of Anthony Lopes' goal.

Reynet was the busier goalkeeper before the interval as he was called into action to keep out Rafael (29') and Nabil Fekir (34' and 45+3'). OL did increase their lead (50') when Houssem Aouar enjoyed some luck as his shot clipped off Valentin Rosier and beat Reynet.

Dijon weren't done and Sliti, on loan from LOSC, scored again with a half-volley that he bounced into the ground and over an angry Lopes (56'). Dijon were still in it until the 77th minute when Burkina Faso international Bertrand Traoré turned home a Maxwel Cornet cross.

Substitute Cornet then got on the scoresheet himself (83') as OL equalled their record of 77 goals for a Ligue 1 Conforama season. After a Depay shot had been blocked, Cornet gave Reynet no chance.

Starting for the first time since recovering from injury, the French international underlined how important he'll be to OL's quest for a top-three finish. A 17th goal in 26 league appearances showed his statistical worth and the skipper also impressed with his astute passing and willingness to drive the visitors forward.

Memphis Depay's fourth-minute opener made it six Ligue 1 Conforama goals in his last five appearances and carried the Dutch international onto 15 league goals for the season. 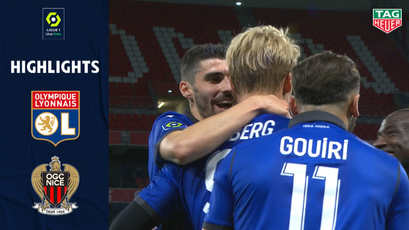