After a superb start to life on the Saint-Etienne bench, Claude Puel has hit tough times with Les Verts, a run of four straight defeats seeing the club plummet in the Ligue 1 Conforama standings.

Puel took over from Ghislain Printant on October 4 with Saint-Etienne 19th in the table and in real trouble, a shadow of the force they were in finishing fourth under Jean-Louis Gasset the previous season despite considerable summer investment. Puel started in the best possible fashion, a late Robert Beric winner securing a 1-0 home victory in the derby against Olympique Lyonnais, Puel's former club.

The OL success was the first part of a nine-game unbeaten run in all competitions and Saint-Etienne surged up the table, climbing as high as fourth following a 3-2 win at Nantes in Week 13. After that game Puel said: "I like seeing this squad progress and if we manage to pick up points to accompany that progress then that means the climate is good in the squad. It's good to be where we are in the standings but we have to stay lucid and accept that there is still progress to be made. We enjoyed a bit of luck but managed to claim the result thanks to our team spirit."

Two months later, following a 2-0 home loss to Nantes behind closed doors that made it four consecutive league losses in the same season for the first time since 2011, Puel's talk was very different. With Saint-Etienne 15th and now only seven points clear of 18th, he said: "Recently we have conceded goals we could have avoided. We need to show greater defensive rigour and be more vigilant. Before the winter break we played a lot of games with a decimated squad and little by little we lost key players. We became fragilised."

Puel has spent the bulk of the last couple of months operating without up to 10 players unavailable because of an injury crisis afflicting the squad. Scoring goals has been a massive problem for ASSE of late and they could ill afford injuries to Denis Bouanga, top scorer with seven goals this season, and Romain Hamouma, who has netted five times. None of the other attackers in the ASSE squad has managed more than a single goal this campaign. The good news for Puel and ASSE is that Gabonese international Bouanga is back in training as he steps up his recovery from a broken metatarsal. A return to form for Wahbi Khazri would help too; the Tunisian international scored 13 times in a memorable debut campaign in 2019-2020 but has struck only once this season and is himself only recently back from injury.

The injuries have made it hard for Puel to settle on his best team and defensively ASSE have been hampered by 18-year-old star William Saliba's fitness problems restricting him to only five league appearances so far. Moreover, Puel has admitted his side's confidence was affected by two heavy losses to Paris Saint-Germain in the space of a month, the first a 4-0 home league reverse and the second a 6-1 humbling at the Parc des Princes in the quarter-finals of the Coupe de la Ligue.

Puel has been unafraid to give youth his head, a policy evident from his first game in charge when he handed 19-year-old Charles Abi his maiden league start in the OL derby. As ASSE chased the game against Nantes last Sunday, Puel's three substitutions were all teenagers as Abi was joined on the field by Edmilson Indjai Correia, 19, and Maxence Rivera, 17. Meanwhile, more experienced men such as Mathieu Debuchy, Timothée Kolodziejczak and Jean-Eudes Aholou stewed on the bench. Getting the balance right between the generations is one of Puel's challenges.Veteran midfielder Yohan Cabaye, the former French international, said: "We know the coach's methods and I don't think the turnover is the problem. You need to be ready to play with him."

Need of a lift

Saint-Etienne could do with a morale booster when they go to Paris FC of Ligue 2 in the round of 32 of the Coupe de France this weekend. Captain Loïc Perrin, the one cub man, commented after the Nantes setback: "I'm not worried because with a good run we can easily move up a condensed league table. We're in a difficult spell and we need to get out of it as quickly as possible. Important players are missing but that's part of a season. We need to be more dangerous in attack. It's hard to be threatening when your crosses end up behind the goal!" 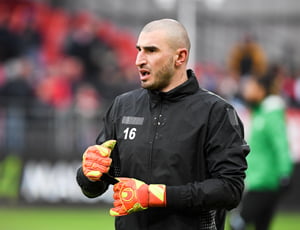