Mario Balotelli's second-half penalty cancelled out an Idriss Saadi opener as Strasbourg and Nice drew 1-1 in Alsace, a result that didn't really suit either side.

Strasbourg have now gone 10 league games without a win and it could have been worse for Thierry Laurey's team but for Alexandre Oukidja coming up with two good saves from Balotelli at the end of the game. Fifth coming into Week 35, Nice could find themselves down in seventh and out of the European places come the end of the weekend. Strasbourg are now only three points clear of 18th-placed Troyes.

Stéphane Bahoken (17') was off target for the home team and then Oukidja saved a weak Dante header (21') before Strasbourg took the lead (21') as Bahoken took Maxime Le Marchand out of the game and crossed for Saadi to score with a diving header, leaving Dante for dead.

Nice stepped on the accelerator and Oukidja saved from Adrien Tamèze (35') and Balotelli (43') before outdoing himself with a stop from Pierre Lees-Melou (52'), Nice's matchwinner against Montpellier the previous week.

Nice were awarded a penalty when Jean-Michaël Seri, making his 100th league appearance for Nice, was fouled by Bahoken (58'). Balotelli  stepped up to send Oukidja the wrong way with a side-footed finish.

The Strasbourg goalkeeper performed more heroics to deny Balotelli (76' and 89') and then enjoyed some luck as Lees-Melou's cross deflected off Dimitri Foulquier and struck the inside of the post (90+3).

Having gone four league matches without scoring, the Italian got back on the scoresheet to avoid equalling his longest drought in the French game. There was extra onus on the former AC Milan star as Alassane Plea was out through suspension and Balotelli would have been the matchwinner but for Oukidja's heroics.

With 11 points claimed in 2018, Strasbourg have the joint-worst record in Ligue 1 Conforama this calendar year, along with Troyes. 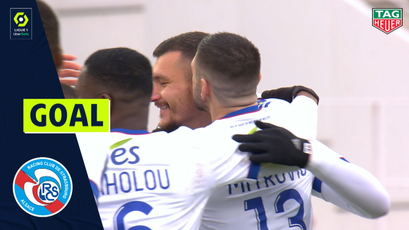