THE MATCH
French president Emmanuel Macron seemed to have forgotten he was due to meet the teams before kick-off. Eventually, the head of state carried out his pre-match duties; PSG - with the convalescing Neymar Jr in the stands - were not as late in turning up to the party at the Stade de France.

Giovani Lo Celso struck the outside of a post with a shot (4') before Kylian Mbappé's acrobatic volley also found the woodwork (8') — on another day, the ball would have ricocheted into the goal rather than to safety.

With Les Herbiers, only the fifth side from the third division of French football or lower to reach the final, struggling to get out of their own half, PSG applied pressure incessantly.

The right-hand post of Matthieu Pichot's goal was struck again by Lo Celso (20') before the young Argentine deservedly scored his first Coupe de France goal — advancing to just outside the penalty area before drilling home a left-foot shot (26').

Preferred to Thomas Meunier at right-back, Dani Alves sent a free-kick dipping just over the crossbar from 25 metres (34') as Pichot's goal led a charmed life. It held until the break, though an Mbappé header raised pulses (39') before the half-time whistle sounded with the underdogs still in the game.

There was nothing fortunate about Pichot's excellent stop from Edinson Cavani just after the restart — the chance itself was quite brilliantly created by impudent flicks from the Uruguay international and Mbappé (49') — though Les Herbiers were again indebted to Lady Luck a minute later.

Mbappé, who had France boss Didier Deschamps watching on, had wheeled away in delight and was celebrating with the PSG bench when referee Mikaël Lesage headed to the sidelines to re-watch the scramble that preceded the France striker's close-range strike — he spotted a handball by Marquinhos that kept the difference between the two to one goal (50').

Pichot ensured that remained the case with an instinctive block to Cavani's close-range effort (54') and then somehow found himself in the way of Mbappé's shot from just two metres out to keep Les Herbiers in contention (69') — incredibly — with just over 20 minutes left.

He might have pulled off another miracle after bringing down Cavani to gift PSG's all-time leading marksman a penalty. Pichot did get a hand to the former Napoli man's spot-kick, but could not prevent the powerfully struck shot finding the corner of the net (75') as Unai Emery's men completed a clean sweep of French football's trophies in 2017/18.

THE PLAYER: Giovani Lo Celso
The young Argentine continues to impress after finding his way into the PSG first team in the latter stages of this season. After ensuring the Ligue 1 Conforama champions did not sleepwalk into the encounter, he set them on the way to victory. Surely there is even better to come in 2018/19.

THE STAT: 42
PSG have now won their last 42 domestic cup ties. They are unbeaten since 22 January 2014 having won 23 successive Coupe de France games and 18 consecutive matches in the Coupe de la Ligue. 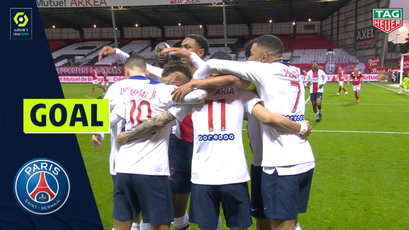