Memphis Depay's magnificent hat-trick sealed a Champions League place for Lyon as they came back from conceding the opening goal to beat Nice 3-2 as Les Aiglons finished outside the European places.

Lyon knew a win would be enough for them to finish in the top three and guarantee a Champions League group stage place. Nice, meanwhile, needed the three points to guarantee sixth and a Europa League berth.

OL started brightly as Nabil Fekir (10') and Lucas Tousart (13') both went close. Yet Nice it was who struck first (18') as Mario Balotelli found Alassane Plea and the OL youth product fired between Mathieu Gorgelin's legs for a massive goal. Walter Benitez saved well from a Houssem Aouar header (24') and in the 32nd minute Bertrand Traoré kneed the ball against the post.

OL equalised (48') when Fekir made the most of a lucky break to square for Depay to hit it into the empty net. Balotelli, Nice's top scorer with 18, missed a golden chance (62') when he inexplicably fired wide of goal after taking the ball down on his chest near the penalty spot.

That miss was made worse when Depay gave OL the lead for the first time (65') as he scored with a cheeky free-kick, hitting the ball under the wall and catching out Benitez. Gorgelin saved well from Plea (80') and then Mariano Diaz hit the post (83') before Depay killed it off with his third goal (88'), lifting the ball over Benitez to conclude after an excellent run from Traoré.

Plea (88') scored his second of the game with a powerful shot following a one-two with Maxime Le Marchand but Nice were destined for an eighth-placed finish, having finished third last term. Post-match, president Jean-Pierre Rivère confirmed Favre's departure after two seasons: "We'd like to thank him for the quality of his work at the head of the team. He's a professional and man of great quality and we wish him every success in the new challenge that awaits him."

Nice must be sick of the sight of the Dutchman. He'd scored twice when OL won 5-0 at Alianz Riviera back in November. 10 of Depay's 19 Ligue 1 Conforama goals for the season have been scored since Week 30 as the 24-year-old has finished the season in ridiculously good form. His triple salvo saw him finish as club top scorer, a goal clear of both Mariano Diaz and Nabil Fekir.

OL finished the season with 87 goals, their top division record. 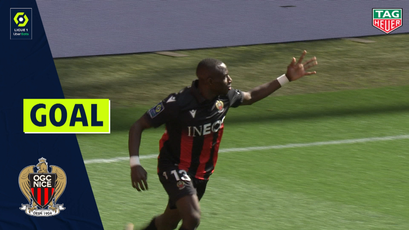