These two sides came into this game at Roazhon Park fresh from wins in midweek, but Angers' hopes of another three points here were dealt a huge blow when they were reduced to 10 men before half-time.

Prince Oniangué had already been shown a yellow card when he was booked again for a foul on Ludovic Baal, making it a miserable return to the club where the Congolese midfielder began his career.

Rennes still toiled to break down the visitors, although substitute James Léa-Siliki - who scored in the midweek win at Lille - saw a curling effort from outside the box on his left foot come back off the bar (71').

Angers responded with a powerful Flavien Tait strike coming crashing back off the woodwork at the other end soon after, before the match was decided by a penalty at the other end. Mateo Pavlovic was penalised for a handball as he slid in to stop a Thomas Brandon cross, and Bourigeaud stepped up to send Ludovic Butelle the wrong way from the spot (84').

A second straight win lifts Rennes up to seventh, while Angers are outside the bottom three only on goal difference.

The 24-year-old midfielder has had a fine season since stepping up a division from Ligue 2 RC Lens. This was his fifth Ligue 1 Conforama goal and his sixth in all competitions.

Rennes' last 13 Ligue 1 Conforama goals have been scored in the second half, with eight of the last 11 coming in the final 10 minutes. 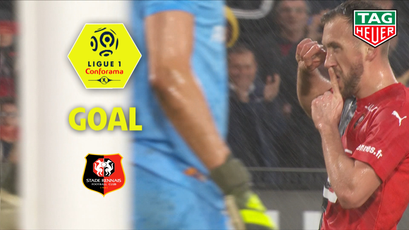