Victory - but also question marks - for PSG after they followed Champions League defeat with a 4-3 win over Bordeaux; OM's unbeaten run ended at 14 matches as Nantes proved too sharp; OL returned to winning ways ahead of their showdown with Juventus.

Heading into Sunday night's clash at home to Bordeaux, PSG were in the unusual position of having gone without a win for to matches in a row - a league draw and Champions League defeat to Dortmund - and although Thomas Tuchel's men emerged 4-3 winners, it wasn't all champagne and roses.

What could have been a night of celebration as Edinson Cavani scored his 200th goal for the club with a trademark clinical header - and as Kylian Mbappé went top of the scorers chart with his 16th of the season - turned into a more worrying affair, with a late red card for Neymar, injury for Thiago Silva and some blots on the record of second-choice 'keeper Sergio Rico.

"It was another bizarre match after the Amiens game, but after the defeat in Dortmund, the most important thing was to win again. It's clear there are things to improve, but winning was the best thing to do," said Tuchel, whose players had their commitment questioned by banners in the stands following their muted display against Dortmund in mid-week. "It was spectacular going forward, but I get the impression we're still lacking a little intensity, and defensively it was difficult for us to defend set-pieces, an area in which they were very dangerous."

Defeat was something of a cruel result for a Bordeaux side who did coach Paulo Sousa proud by taking the match to their illustrious hosts, new signing Ruben Pardo notably going close to breaking the with his debut Ligue 1 Conforama strike, but Les Girondins nonetheless slip back into the bottom half of the table (12th) with just two wins in their last ten league outings.

Marseille were doubtless hoping for a different result for PSG, whose lead atop the standings returned to 13 points thanks to OM's coming unstuck 3-1 at home to Nantes - who hadn't won in five - in a tough match that stopped their impressive unbeaten run at 14 matches.

"Our unbeaten run in the league has come to an end and that is a shame," lamented OM boss André Villas-Boas, for whom Morgan Sanson's superb strike from outside the area was scant consolation. "We thought the game had changed when we got back to 1-1 and got our confidence back, but the second goal was a major blow. We changed to play with two attackers but didn’t create much."

OM nonetheless still have an eight-point cushion ahead of third-placed Rennes, who had captain fantastic Mbaye Niang's brace to thank for a 2-1 win over Nîmes, whose hopes of beating the drop took a blow as they slipped back into the bottom three after a run of four wins on the bounce.

LOSC remain hot on Rennes' heels, however, after Loïc Rémy hit a double in a 3-0 dismantling of bottom club Toulouse, who haven't won since they beat LOSC 2-1 in Round 10 and now sit ten points adrift of 19th-placed Amiens.

Olympique Lyonnais may have slipped to 11th after going winless in their first four in February, but Rudi Garcia's men are still alive in the UEFA Champions League - the first leg of their last 16 tie with Juventus will be played on Wednesday - and prepared in the best possible way as Moussa Dembélé (pen.) and Houssem Aouar did the damage in a 2-0 win over ten-man Metz.

Injury concerns for Dembélé and stopper Jason Denayer were put to rest by coach Rudi Garcia after the match, while sporting director Juninho - whose star winter recruit Bruno Guimaraes made a creditable debut in the match - was clearly already focused on Wednesday's showdown.

"We need to rest now before Juventus. That will be a completely different match," said the OL legend, doubtless also aware that a Rhône derby at home to arch-rivals Saint-Etienne awaits on Sunday night. "We'll be able to prove to our fans that we're a good team. We'll need to play that game flat out and go out onto the pitch thinking we can beat them. We can have hope if we manage to play with freedom, if we play to our level and we're very aggressive."

The win takes Les Dogues leap back up to seventh, making plenty of ground on sixth-placed Strasbourg, who could only draw 0-0 with Amiens, and also fifth-placed Monaco, for whom a late Guillermo Maripan header rescued a 1-1 draw away to Dijon.

Saint-Etienne may not have prepared for the derby with a win at home to Reims, but they did manage to secure a point - and climb to 15th - with Denis Bouanga hitting his ninth of the season in reply to Boulaye Dia's spot-kick.

Nice and Brest played out a thrilling 2-2 draw as Adama Ounas and Kasper Dolberg tore it up in attack before Brest fought back to clinch a share of the spoils thanks to Samuel Grandsir and a cruel own-goal for Nice captain Dante.

Montpellier's charge for a European finish showed further signs of dropping off as they dipped to ninth after being bested 1-0 by a Stéphane Bahoken header away to Angers, who gladly snapped a four-match skid to halt their slide down the table at 14th. 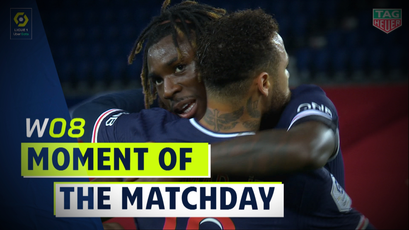