OL prodigy Rayan Cherki has taken advantage of the shutdown to unveil his Dream XI on OL's Instagram account… with some surprising choices ...

In Cherki's ideal eleven, we find a motley crew of talents draws from several generations of the world's finest footballers: from Zidane to Messi, via Maldini and Marcelo, but there are also a few friends and colleagues.

A dream eleven arranged in a 4-2-3-1 with the explanations of the virtuoso - who would build a Frankenstein hybrid of himself, Jürgen Klopp and Pep Guardiola to coach the side he believes would be right at home in the English Premier League - below.

Gianluigi Buffon (Juventus, PSG, Italy): "Because he's a great 'keeper who made his mark on the history of football. He's a 'keeper I really like."

Dani Alves (Barcelona, Juventus, PSG, Brazil): "He's a player I appreciate a lot in terms of the way he is and the way he plays."

Oumar Solet (OL youth, France youth international): "Because he's not very good-looking. You need a scary-looking guy in the centre of defence."

Paolo Maldini (AC Milan, Italy): "One of the greatest Italian defenders that football has seen."

Marcelo (Real Madrid, Brazil): "I love his playing style and he has made a real mark at Real Madrid."

Maxence Caqueret(OL, France youth international): "I love playing with him. We're on the same wavelength and really enjoy playing alongside each other."

Tanguy Ndombele (OL, Tottenham, France): "He's a crack. He has a great way about him and he is extremely talented. Maxence keeps your game ticking over but Tanguy is the guy to break lines when the time comes."

Zinedine Zidane (Cannes, Bordeaux, Juventus, Real Madrid, France): "His passes, his touches… for me, it was Zidane who invented the angled first touch that eliminated the defender. He's incredible."

Lionel Messi (FC Barcelona, Argentina): "I don't like Messi, but he's Messi. He can do everything and he does everything with Barcelona. That's why he's in the team."

Amine Gouiri (OL, France youth international): "I'd have Amine as striker because he's versatile. He can do everything - shoot, score, dribble, cross, hold the ball up - everything that a modern striker needs." 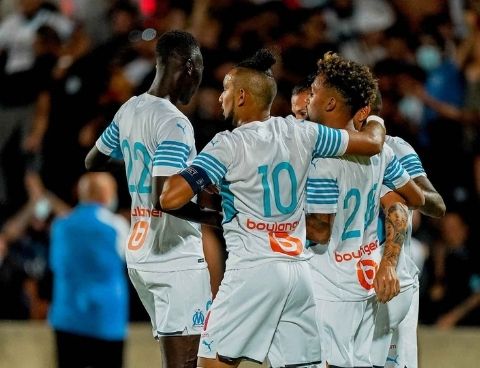