Radoslaw Majecki, Strahinja Pavlović and Anthony Musaba, all aged 20 and armed with fine reputations, joined AS Monaco this summer. Here's an introduction, from three former team-mates.

After a short week's training camp in Poland under their new coach Niko Kovac, the AS Monaco players have returned to train on Le Rocher, as the principality is known in France.

The trio of 20-year-olds all joined up with the AS Monaco squad in the 2019-20 off-season and will be keen to follow in the footsteps of other young talents whose careers the principality club has made a habit of launching.

While Majecki and Pavlović signed up with AS Monaco in the last winter transfer window before being loaned out to their former club to finish the season, Musaba's arrival was made official at the end of June. But what is the profile of these three players? And above all, what are they worth? Find out with three of their team-mates from Warsaw, Nijmegen and Belgrade.

'A modern goalkeeper who reads the game well'

Radoslaw Majecki, in the words of Luxembourg international Chris Philipps (team-mate between 2018 and January 2020):
"He is a modern goalkeeper who does not hesitate to participate in the construction of play and who reads the game well. He anticipates depp pasees behind the defence, for example. Radoslaw is vocal. He talks to his defence all the time, which is rare for a young goalkeeper. This is his main strength. He is also very good on his line. He's a little less comfortable on the break, but he's got a lot of confidence, so he's not afraid to come out for the ball, even if sometimes it won't go his way. But that's better than a goalkeeper who sticks to his line. In the dressing room, he's a strong character. He doesn't hesitate to speak up. So far, it's been in his mother tongue, so I'm curious to see how he'll do in French or English. But he is a smart and ambitious boy, as he has proven by choosing to go abroad."

'A powerful defender, a real man-marker'

Strahinja Pavlović according to Guinean international Seydouba Soumah (team-mate in 2019-20):
"Strahinja reminds me of Gérard Piqué. Even though he's young, he's not afraid to step up and take responsibility. He's a powerful defender, tough in the challenge and a real man-marker. He's a left-footer who can play well out of defence. Strahinja likes to get up front for set-pieces and looks to hit powerful headers. He scored like that this season but he also scored a spectacular over-head in our last game, the cup final. It was a goal I didn't even see because I'd just come into the dressing room with an injury. Given his height (1.94m), speed is not his strong point, but it's hard to take him down. And in life, he's someone with an easy character, who laughs a lot with his team-mates.

'Very fast, comfortable on both feet'

Anthony Musaba according to Jonathan Okita (team-mate in 2019-20):
"He's a very complete player. He's athletic, very fast, with a massive work rate. His strong point? Speed, but also his ability to eliminate his man one-on-one on his wing. He has an ability to score but he has to become even more of a killer in the box. I would compare him to Ousmane Dembélé because he is very comfortable with both feet and bases his game on speed. But Anthony is taller. In life, he's a good guy, and he really to the more experienced players. He's also a little comedian, who likes to laugh". 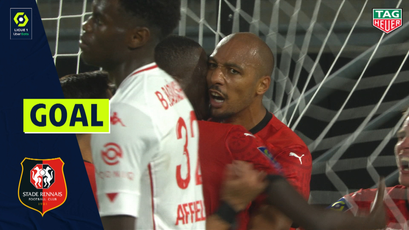