All You Need to Know: Racing Club de Lens

Racing Club de Lens are former French champions and one of the country’s best-supported teams. And this season sees them make a welcome return to the top flight after five years away, so Ligue1.com tells you all you need to know about Les Sang et Or…

The club was founded in 1906 as Racing Club Lensois, the name a reference to Racing Club de France, better known for the rugby union side Racing 92 from the Paris region but who were for a long time one of French football’s leading sides.

To understand RC Lens it is vital to first of all understand the town’s history of heavy industry. Coal was discovered beneath Lens in the mid-19th century and it went on to become a major mining centre for more than 100 years, before the last mine shut down in the 1980s. In the years immediately after World War One - in which most of Lens was destroyed - the football team was made up largely of Polish immigrants who had come to work in the mines, and the club to this day retains strong connections with the working-class community.

The club became professional and entered the second division in 1934, before appearing in the top flight for the first time in 1937. They have gone on to spend the majority of the years since in the elite, even if most of the last decade has been spent in Ligue 2. Lens were a second-tier club when they reached their first Coupe de France final in 1948, losing to northern neighbours LOSC Lille 3-2 in front of more than 61,000 fans in Colombes. They returned to the first division a year later, and finished as runners-up in the league in 1956 and again in 1957. They also won the now-defunct Coupe Drago three times, in 1959, 1960 and 1965, and there was a third-place finish in 1964, but the decline then set in.

The local coal-mining company was in crisis and was forced to make many workers redundant. It then cut ties with the club, which slipped down into the amateur ranks in 1969. However, with the support of André Delelis, the mayor of Lens, and under coach Arnold Sowinski - a former player - the club rapidly rebounded and was back in the top division by 1973. They got to their second Coupe de France final in 1975, losing 2-0 to the mighty AS Saint-Etienne of the era, but qualified for Europe for the first time because Les Verts also won the league. Lens beat Home Farm of Dublin in the first round but lost to Dutch side Den Haag in the following round.

There were more near misses, including a second-place finish in 1977, and occasional appearances in Europe, but otherwise the 1980s was an unremarkable period in the club’s history and the team started to go backwards after coach Gérard Houllier left for Paris Saint-Germain in 1985. In 1989 they were relegated. Golden era and champions in 1998

However, local businessman Gervais Martel had become president in 1988 and needed time to turn the club around. Lens came back up to the top flight in 1991 and the next decade was to be a golden era for the club.

Crowds at the Stade Bollaert began to explode, and the team returned to Europe thanks to successive top-five finishes in 1995 and 1996. The best was about to come. Former Lens player Daniel Leclercq was promoted from his role as assistant to become coach in 1997 after Roger Lemerre departed to join the France coaching staff ahead of the 1998 World Cup. Lens signed the striker Anto Drobnjak from SC Bastia and the midfielder Stéphane Ziani from Girondins de Bordeaux. Those two were Lens’ top scorers as they pipped FC Metz on goal difference to win the title in 1998 for the one and only time in their history, and 30,000 fans gathered at the Stade Bollaert to celebrate their triumph. Lens almost won the double that year too, only losing 2-1 to Paris Saint-Germain in the Coupe de France final.

There followed an adventure in the Champions League in 1998-99, with Les Sang et Or famously beating Arsène Wenger’s Arsenal 1-0 at Wembley thanks to a Mickaël Debève goal, celebrated joyously by 8,000 travelling supporters. A home defeat by Andriy Shevchenko’s Dynamo Kiev denied them a place in the quarter-finals.

The success continued for Leclercq’s team at the end of that season as they won the Coupe de la Ligue, beating Metz 1-0 in the final. Leclercq was replaced as coach later in 1999 by François Brisson but he took the team on their best ever European run, reaching the semi-finals of the 1999-2000 UEFA Cup. They notably eliminated Atlético Madrid before losing to Arsenal in the last four.

There were further flourishes to come. In 2002 Lens came second to Olympique Lyonnais in Ligue 1, ensuring a return to the Champions League the following season, as Lens drew with Bayern Munich home and away and came from behind to beat eventual winners AC Milan 2-1 at Bollaert. Lens were European regulars at this point and made it to another Coupe de la Ligue final in 2007-08 under Jean-Pierre Papin, only to concede a last-gasp goal and lose 2-1 to PSG. It was to be the start of a long period of decline.

They were relegated at the end of that season, and have spent nine of the last 12 seasons in Ligue 2, enduring three relegations in the last dozen years. In that context, there was no way they could keep hold of Raphaël Varane, the classy defender who was sold to Real Madrid in 2011 and went on to win the World Cup with France in 2018. Martel has moved on after a tumultuous period and businessman Joseph Oughourlian is now in charge. Throughout the difficult years, Lens have remained one of France’s best supported clubs. The 2019-20 average of more than 26,000 was bettered by only four teams in Ligue 1. Lens were second when the season was ended early because of the coronavirus pandemic, ensuring a return to the elite and hope for the future under new coach Franck Haise.

Lens started out wearing blue but changed to their now legendary blood and gold in 1923. On their own website, the story goes that René Moglia, who had just been appointed club president, came up with the idea when he passed in front of the town’s ruined church, which dated back to the era of the Spanish occupation in the 16th and 17th centuries. Red and yellow are the colours of the Spanish flag, but to this day Lens are known as Les Sang et Or for their striped shirts, worn with black shorts.

Sikora holds the record for most appearances by a Lens player with 590 between 1985 and 2004. The defender starred for his local club as they won the league in 1998 and the Coupe de la Ligue the following season. After retiring, Sikora spent 13 years on the coaching staff, including two brief stints in charge of the first team in Ligue 2, most recently in 2017-18.

Another native of northern France who represented Lens as a defender in their glory days and later had a stint as coach. Wallemme broke into the first team in 1986 and spent 12 years playing for Les Sang et Or culminating in their title-winning 1997-98 campaign. After spells at Coventry City, Sochaux and Saint-Etienne, Wallemme returned to Lens to finish his playing career in the 2001-02, when the team fell just short of a second league title. He later returned as coach and led Lens to promotion to Ligue 1 in 2009 before keeping them up the following season, but he departed midway through the 2010-11 season.

Leclercq (pictured above in the glasses) spent almost a decade as a player for Lens and also notably turned out for Olympique de Marseille. Nicknamed "The Druid" for his distinctive long, white hair, as a defender he was part of the OM squad that won the title in 1971, but he is best remembered for the job he did in the dugout in Lens. A native of France's far north, Leclercq became Lens coach in 1997 and led Les Sang et Or to their first, and to date only, league title in his first season in charge with a squad containing the likes of Marc-Vivien Foé, Tony Vairelles and Vladimír Šmicer. He then oversaw their triumph in the Coupe de la Ligue in the following campaign before departing - those remain the only major trophies Lens have won. He died in November 2019 at the age of 70. One of the most remarkable things about Lens is that the entire population of the town could fit inside their stadium and there would still be several thousand spare seats. Lens has a population of just 31,415 according to France’s most recent census figures, yet the Stade Bollaert-Delelis holds 37,705. The ground is named after Félix Bollaert, the manager of the Lens coal mining company who helped rebuild the industry in the years after World War One, and who gave the go-ahead to build the stadium in the early 1930s. It also carries the name of André Delelis, a minister in François Mitterand’s government in the 1980s who was also mayor of Lens for 32 years between 1966 and 1998.

The stadium hosted two matches at Euro ’84 and six games in the 1998 World Cup, including France’s extra-time win over Paraguay in the last 16. It was refurbished and modernised for Euro 2016, when it hosted four matches including England’s 2-1 win over Wales. While the current capacity is limited, a record crowd of 48,912 watched Lens beat Olympique de Marseille in February 1992. One notable feature of the Stade Bollaert-Delelis is that the biggest stands are at each end of the ground where more than 12,000 fans can fill the vast banks of the Trannin and Delacourt stands.

The Lens training ground, opened in 2002, is called La Gaillette. A gaillette is a lump of coal. Players to have come through the academy at La Gaillette include Raphaël Varane (pictured above), Geoffrey Kondogbia, Serge Aurier and Thorgan Hazard. 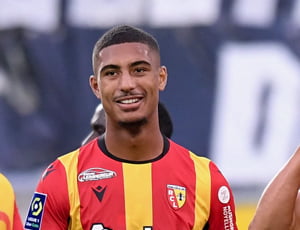 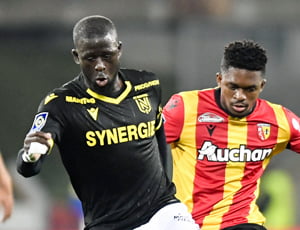 Honours even between Lens and Nantes 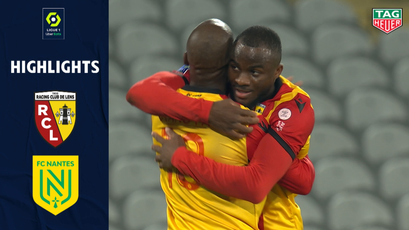 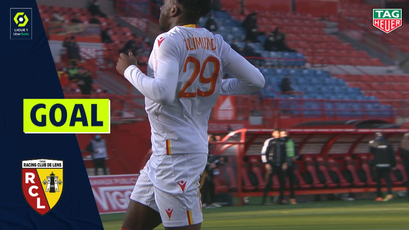