Now in his fourth season at the Parc des Princes, Neymar Jr. admits he is feeling happier than ever with life in the French capital.

“I’ve always liked the city of Paris. Even when I was at Barcelona, I used to come here when I had some days off. This place has always been special to me and it still is,” Neymar said in an interview with PSG Le Mag which was also broadcast on The Ligue 1 Show on beIN Sports.

Signed from Barcelona in August 2017, Neymar is hoping to take PSG one step further this season after their run to the UEFA Champions League final, in which they lost to Bayern Munich, in August.

“For me, every year is a chance to write history, to do something great for the club, and this year will be no different. Trying to make history is what truly motivates me. I want to play big matches, win trophies and leave a trace in the club’s history books and archives,” said the Brazilian.

‘I want to have fun’

Neymar is set to return to Thomas Tuchel’s team on Sunday against Stade de Reims after suspension. In 52 Ligue 1 appearances so far, he has scored 47 goals and provided 27 assists, offering the PSG faithful some unforgettable moments by drawing on a playing style honed on the streets back home. “Brazilians are used to playing football in the street. We’re used to playing in testing conditions and we know how to get out of tight corners,” he said. “I love football the same today as when I was a kid. I just want to play, it doesn’t matter where or when. I want to have fun with a ball at my feet. That’s what I love.”

PSG’s number 10 is the current darling of the Parc des Princes, but Neymar is just the latest in a long, illustrious list of Brazilians to have worn Les Rouge et Bleu, including Raí, who played for the club in their previous golden era in the 1990s in between spells at São Paulo. Paris was also Ronaldinho’s first stop in Europe before he starred for Barcelona.

“Raí was my mother’s favourite player. She was a big São Paulo supporter. She loved Raí the player but she also thought he was very handsome. She was a really big fan of his.

“Ronaldinho was a source of joy and magic. With him, football was an art. He was always improvising. He’s one of the most technical footballers in history and he’ll always be remembered as a magician,” added Neymar, who also recalls Nenê’s days in Paris.

“Nenê is one of my best friends in football. He is somebody that I met thanks to football. We get on really well and he’s become a good friend. He is a super player and he is also somebody who left a trace in Paris Saint-Germain’s history.

“I also watched Alex play a lot with Santos when I was a boy. I wasn’t fortunate enough to play with him, but he’s had a great career and we have some mutual friends. They all tell me he’s a top guy. In any case, he was a brilliant player.

“Marquinhos is another one of the friends I have in football. He’s such a lovely person in normal life, then he changes when he’s on the pitch. He’s totally focused on what he is doing, always determined. He’s becoming a leader for us and I’m really happy to have him in the team.”

‘Not afraid of pressure’

With Neymar spending the best years of his career at PSG, it seems certain he will be remembered just as fondly as his cherished compatriots.

“I have two big memories. The first one is the day that I signed and was presented at PSG. It was emotional. The second was the victory against Dortmund (in last season’s Champions League), which was a really big moment for us, even if our supporters weren’t there inside the stadium.” Neymar has already won three league titles, two French Cups and two Coupe de la Ligue trophies, but his ultimate goal is to win the Champions League, a challenge the ambitious 28-year-old won’t be shying away from.

“I’m not afraid of pressure. For me, it’s just become something normal that I live with. I’d even say I like it and I need it. I like difficult games, testing moments, it’s something I’m very comfortable with. Now I hope we’ll be able to reach our goals all together and continue writing history for this club.”

This season’s Champions League group-stage draw is next Thursday, October 1. The first round if group games will be on October 20 and 21. 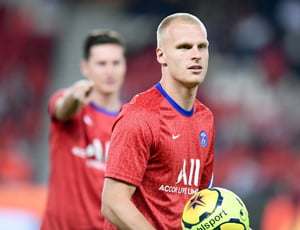