LOSC Lille put their unbeaten record on the line when they entertain a resurgent Olympique Lyonnais on Sunday night in one of the games of the Ligue 1 Uber Eats season so far.

Lille have looked the most likely team to give Paris Saint-Germain a run for their money in this campaign and are the only side still unbeaten heading into the weekend after winning five and drawing three of their opening eight games.

Christophe Galtier’s team have a clearly defined way of playing, a solid spine and myriad attacking options which allow them to compete on all fronts with European football to think about too. On Thursday they battled back from two goals down to draw 2-2 at home with Scottish champions Celtic in the Europa League, with Zeki Çelik and Jonathan Ikoné scoring after Jonathan David had an earlier penalty saved.

The form of David, the Canadian striker signed from Gent in the close season for €27 million, has been the biggest worry for Galtier. He has yet to score, but his fellow forward Burak Yilmaz has impressed. The veteran Turkey captain has four goals in his last four Ligue 1 Uber Eats outings after netting the equaliser in last weekend’s 1-1 draw at OGC Nice.

Highlights: Lille hit back to draw at Nice

Lille have only trailed for nine minutes in the league all season, and appear determined to return to the podium after just missing out in the last, curtailed campaign. However it is true that they have failed to win their three toughest fixtures so far, drawing with Stade Rennais FC on the opening night as well as away at Olympique de Marseille before the stalemate at Nice. Lyon are likely to provide another serious examination of their credentials after they were forced to come from behind against Celtic on Thursday.

“The team’s reaction reassured me, but obviously a coach doesn’t like it when his side goes behind,” Galtier said after that match. “We need to correct our mistakes. We don’t have much time to prepare for Sunday’s match but we will work on it. We responded quickly at Nice and again (against Celtic). It is good for my players and it shows the character this team has.”

They will need to display that character once more against Lyon in a match which sees Rudi Garcia once more return to face the club with whom he won a brilliant Ligue 1 and Coupe de France double a decade ago now.

Lyon endured a sluggish start to the campaign on the back of their run to the Champions League semi-finals in August but the transfer window closed without either Memphis Depay or Houssem Aouar leaving the club and they have recorded back-to-back wins since then. They have been impressive victories too, with a 3-2 success at RC Strasbourg Alsace followed by a 4-1 win at home to AS Monaco last weekend.

“We want to keep our run going. We have a team full of quality and we are going to Lille to win. We have shown how clinical we can be in the last two games,” Garcia said at his pre-match press conference.

A win will allow Lyon - who are not in Europe at all this season - to move to within two points of Lille in the table, and Garcia added: “We miss Europe. The only objective we have is to get back into the Champions League. At the moment we are sixth and we are going to Lille to try to extend our positive run of results.”

Karl Toko-Ekambi will be the man to watch for the visitors after scoring four goals in the last two matches, while young defender Melvin Bard is suspended after being sent off against Monaco. Jason Denayer is hoping to return after missing the Monaco match.

For Lille, José Fonte, Luiz Araujo, Renato Sanches and Yilmaz could all return to the starting line-up after being rested at kick-off in the Europa League. 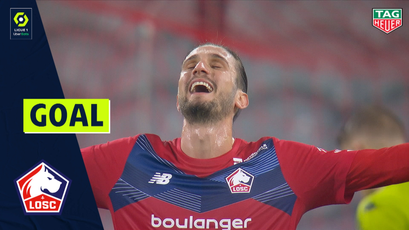