Check out the rules and special cases regarding the display of players' names on shirts in Ligue 1 Uber Eats.

Before the season started, Ligue 1 Uber Eats clubs communicated to the LFP the information that should appear on their players' shirts during matches (and again at the end of the summer transfer window for the latest arrivals). In addition to assigning the annual shirt numbers of players likely to play in the first team, the clubs specified the names to be displayed on the shirts.

This is an area in which certain practices are permitted, without the need to apply to the LFP's Competitions Committee for authorisation, it being understood that nicknames, initials and the use of a non-Latin alphabet are not permitted, according to Article 576 of the Competition Regulations. Requests for special cases, such as tributes or for the Chinese New Year, are not affected by these criteria.

With regard to authorisations, last season, for example, one was granted to OGC Nice for the Brazilian defender Robson Alves de Barros, for whom the name 'BAMBU' was adopted. 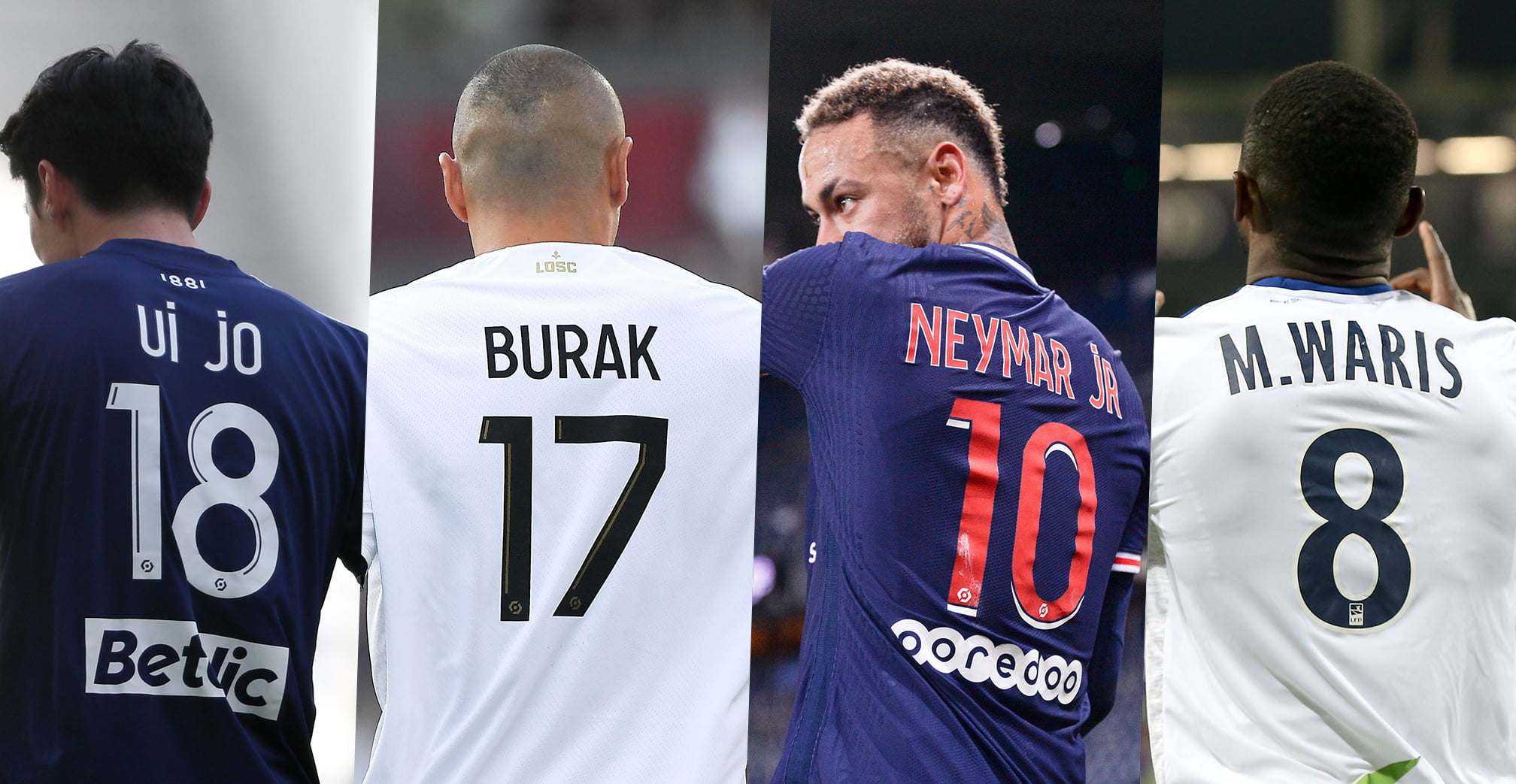 The eight cases not requiring authorisation:

- First letter of the first name.surname and its inverted variant with or without dot, with or without hyphen.
The first case is quite widespread in the Ligue 1 Uber Eats teams, with for example 'T. WEAH' and 'J. DAVID' at LOSC, 'L. PAREDES' at PSG, 'Y. ATAL' at OGC Nice, 'H. TRAORE' at Stade Rennais, 'E. LE FEE' at FC Lorient or 'K. DIATTA' at AS Monaco, 'K. N'DORAM' at FC Metz and 'R. SANCHES' at LOSC.

- A single surname when it is double-barrelled.
Amongst the best known cases are Fabregas Soler reduced to 'FABREGAS', Thuram-Ulien to 'THURAM', Mbappé Lottin to 'MBAPPE' or Nicolas de Roussel 'DE PREVILLE' who joined FC Metz. The captain of LOSC is also part of this case: Da Rocha Fonte to 'FONTE'. And from neighbouring Lens, it is Kpene Ganago who has reduced his name to 'GANAGO'.

For the record, so did Jordan Siebatcheu with Stade Rennais (PEFOK).

- Only the first name.
Among the many examples that exist, last season Memphis Depay had a shirt with only 'Memphis' on it. Brazilians are also adept at simplifying their names: 'DANTE' at OGC Nice (Dante Costa Santos), 'NEYMAR JR' at PSG (Neymar Da Silva Santos Junior) or even 'GERSON' at OM (Gerson Santos Da Silva).

In the city of Marseille, Spaniard Alvaro Gonzalez Soberon has 'ALVARO' as his only displayed name, as does 'KONRAD' de la Fuente. At LOSC, Reinildo Isnard Mandava has been reduced to 'REINILDO' and Turkey's Burak Yilmaz has 'YILMAZ' on his number 17 shirt. In addition, ex-Aiglon player Myziane Maolida was a French example of just the first name on his shirt ('MYZIANE').

- First name associated with the first letter of the surname or the reverse.
This season, the case of the is notably present in the ranks of Lyon with Bruno Gomes Soares to 'BRUNO G.', and also at RC Strasbourg Alsace, with Waris Majeed to 'M.WARIS'.

- Surname associated with the first name or the reverse.
Three Spaniards from Paris SG have chosen this type of flocking: namely the recruit 'SERGIO RAMOS', 'ANDER HERRERA' and 'JUAN BERNAT'.

- Two first names.
Again, the Brazilians are among the players willing to use this permitted case, but not exclusively. If for example 'LUIS HENRIQUE' does it at OM (Luis Henrique Tomaz de Lima), it is also the case of the Korean international Ui Jo Hwang, whose shirt displays his first names 'UI JO'. Also with the Girondins, Samuel Kalu Ojim wears only his first names on his back 'S.KALU'.

- Two surnames.
Players with two surnames have the possibility to add them to their jersey, such as Randal 'KOLO MUANI' at FC Nantes, Alexis 'CLAUDE-MAURICE' at OGC Nice, Wuilker 'FARINEZ ARAY', Ronaël 'PIERRE GABRIEL' at SB29 or Jeff 'REINE-ADELAIDE' and Karl 'TOKO EKAMBI' at OL.

- The first full name + the first letter of the second or the reverse.
This is particularly the case at Monaco, where the Brazilian fullback Caio Henrique has a jersey with 'C.HENRIQUE' on it. In the past, Florent SINAMA-PONGOLLE wore a 'SINAMA-P' in Ligue 1 Uber Eats.

For all other cases, only the names under which they are recognised by their federation can be submitted to the LFP's Competitions Commission for validation on the basis of official documents. Examples: 'MEXER' instead of Edson André SITOE (Bordeaux).