Having scored four Ligue 1 Uber Eats goals since the start of the season, PSG striker Kylian Mbappé remains the league's top currently active scorer. With 111 career goals in France's top flight, he is five lengths clear of Monaco's Wissam Ben Yedder and his 106 career Ligue 1 Uber Eats goals, including 5 in 2021-22. Another active player has broken the 100-goal barrier: Bordeaux's Jimmy Briand. Yet to open his account this season, the 36-year-old striker scored his 100th Ligue 1 Uber Eats goal in October 2020.

Gameiro back, 100th in Payet's sights

It is therefore Kylian Mbappé who remains in the lead. Last March, against Olympique Lyonnais, the Parisian became the youngest player in history to reach the 100-goal mark aged just 22 years, 3 months and 1 day (in his 142nd match in the elite). Wissam Ben Yedder (AS Monaco) reached the 100-goal mark in the French league on 2 May. In the process, Ben Yedder became the first French player to score 20 goals in a single season with Monaco in Ligue 1 Uber Eats since David Trezeguet back in 1999-00 (22).

The next player to reach the 100-goal mark could well be Dimitri Payet. The OM number 10 has already scored five goals this season, bringing his career total to 92. The summer of 2021 saw Kévin Gameiro, and the former Lorient and PSG man has since scored his 77th and 78th goals in the top flight. The latest? A powerful right-footed strike at Montpellier on Saturday (1-1). Meanwhile newly signed Rennes striker Gaëtan Laborde, who was on target against PSG on Sunday (0-2), is closing in on 50 goals. 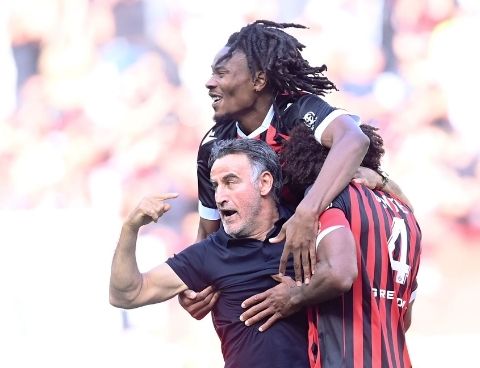