Jonathan Clauss has been called up to the France squad for the first time aged 29 having never represented his country at any level, just desserts for the Lens goalmaker supreme whose success has been a long time coming via French football's lower leagues and Germany.

Born in eastern France in Strasbourg, Clauss joined his hometown club's youth academy only to be let go after 10 years there, his dream of becoming a professional seemingly shattered. To say he has taken the scenic route to the top is an understatement, though it has not all been pretty along the way.

After three years with an amateur team in Strasbourg, he joined sixth division German side SV Linx, a step that would later serve him well as it improved his German language skills. Those would come in very handy when he joined Arminia Bielefeld, then in Bundesliga 2, in 2018, but in the intervening three years he went to two different amateur French clubs before finally signing a first professional contract — aged 24 — with Ligue 2 Quevilly-Rouen. Though the Normandy club struggled, Clauss stood out with eight second-tier assists, earning him the move to Bielefeld.

Even that only came about due to an injury suffered by the German club's first-choice for the right-back role and Clauss' unlikely transfer to Belarusian side Dinamo Brest falling through. Clauss capitalised on his good fortune, and — in his club's league title-winning 2019/20 season — netted five goals and provided eight assists. Out of contract, he was recruited by Lens initially as cover at right-back only to overcome the competition for places in a spectacular first season at top-flight level with three goals and six league assists in 33 appearances as Lens enjoyed a fantastic return to Ligue 1 Uber Eats.

His Twitter handle, @Djoninho25, gives you an idea that he is no ordinary right-back. If you're thinking defender, he's in the mould of a Brazil legend Cafu, offering his team a lot going forward while not neglecting his 'day job' at the back. Those qualities have been brought even more to the fore with Lens boss Franck Haise employing Clauss as a right wing-back, who gets his fair share of goals as well as assists.

The 2️⃣3️⃣-man squad to face the Côte d'Ivoire 🇨🇮 and South Africa 🇿🇦 in Marseille and Lille.

The clamour for Clauss to be called up into the France squad midway through the 2020/21 season had died down in the early stages of 2021/22. After a flush of early season success with a goal and three assists in the opening five league games, Clauss' form dipped as he added just one assist in his next seven appearances.

"It wasn't physical, it was more mental" said Clauss, admitting speculation he would get a call-up from Didier Deschamps had distracted him. "I was forcing myself not to and spoke about it with my girlfriend. At one point, she told me, 'It's not just the weak who cry.' It did me the world of good, and I slept so well that night. Next time, I won't hesitate to cry again."

The result of those tears? He now stands on four goals and nine assists — both career record tallies — and has actually been called up by France. Maybe there will be some tears of joy now…

"When you know him, you know he's a guy who gives his all, always going forward. He's like that in life off the pitch too, a guy who's a little crazy and who doesn't worry too much about things." Anthony Beuve, who played with Clauss at Avranches in the lower leagues of French football

"Of course we'd like him to be in the France team, but he doesn't believe he will be. He says that it's not for him, but after the career that he's had, it wouldn't be a surprise." Clauss' mother Josiane in 2021

>> OPINION: Can Messi finish the season on a high with PSG? 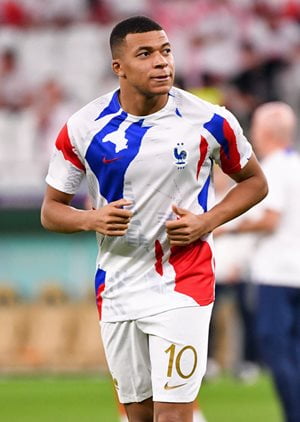