Ligue 1 Uber Eats is the home of the best young players in the world. Kylian Mbappé is still only 22, but there is another wave behind him. Ligue1.com looks at the brightest youngsters who broke through in 2020-21.

But while Mbappé and increasingly Camavinga are household names, the League of Talents has many more where they came from…

Unavoidably first in this list, David put Lille on their way to their first league title in a decade on the final day, the Canadian youngster opening the scoring in les Dogues' 2-1 win over Angers SCO.

Although he joined last summer as LOSC's record signing, David took a while to get going in the French top-flight, not opening his account until his 11th game - a 4-0 win over FC Lorient. But by the time Lille lifted the title at the Stade Raymond Kopa, he had struck up a fine understanding with Burak Yilmaz in attack and concluded the second half of the campaign with 11 of his 13 goals, scored at a rate of one every 130 minutes.

Lille's recruitment last summer was shrewd, and while David was winning plaudits at one end of the pitch, Botman was doing likewise at the other. Plucked from Ajax's youth academy for relative peanuts, Botman was tasked with replacing the Arsenal-bound Gabriel.

To say he has been a success beside club captain Jose Fonte in central defence would be an exercise in gross understatement. Botman won 120 aerial duels in 2020-21, and is now pushing to replace the injured Virgil Van Dijk in the Netherlands' UEFA Euro 2020 squad.

Ahead of @LOSC_EN taking on PSG in the @coupedefrance tomorrow, we have a special #LeBeauJeu featuring @OnsOranje defender Sven Botman!

Hear him talk about his countryman @VirgilvDijk here and get the full episode ⤵️⤵️https://t.co/v1suSu6RD1 pic.twitter.com/QbjsoY8PAc

Where Tchouaméni differs from David and Botman is that he is genuinely homegrown, coming out of the Girondins de Bordeaux youth academy before making the switch to Monaco midway through last season. This was also not his first season of Ligue 1 Uber Eats football. But what he shares with them is that this was undeniably the campaign in which he put himself on the map.

Striking up a fine understanding with fellow youngster Youssouf Fofana as part of a double pivot in Niko Kovac's preferred Monaco midfield, Tchouaméni also had a hand in seven goals going forward. The Under-21 international looks certain to become a full-time France international in the near future.

Watch: Highlights of a Tchouaméni-inspired 4-0 win over Saint-Étienne

Joining Tchouaméni in les Bleuets' midfield for the upcoming UEFA European Under-21 Championship in Hungary and Slovenia will be Lyon metronome Caqueret. Where Tchouaméni boasts pace and power, Caqueret likes to let the ball do the work for him, even if he has some bite of his own.

In a packed Lyon midfield which also boasted Brazilian trio Thiago Mendes, Bruno Guimaraes and Lucas Paqueta, Caqeueret became the first name on Rudi Garcia's teamsheet. After recovering possession an average of 10 times per match - and then keeping it - it is not difficult to understand why.

The Rennes conveyor belt of talent remains in full flow. Alongside Camavinga, the Bretons fielded teenagers Adrien Truffert and Doku more often than not in 2020-21. Both deserve praise for their performances, but it is winger Doku who has the ability to lift fans to their feet having taken his markers off theirs.

Four goals and eight assists show that end product is beginning to emerge alongside all the trickery, and if there is a feeling that 44 games in all competitions perhaps should have returned more, Doku's four goal involvements in six games since his full international debut for Belgium last September augurs well. 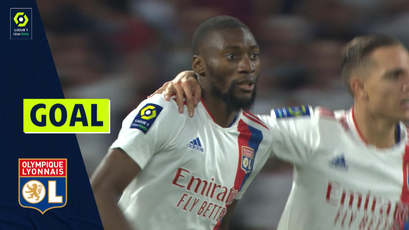