Corsica will be back on the Ligue 1 Uber Eats map in the 2022-23 season after AC Ajaccio won promotion to return to the top flight after an absence of eight years.

Ajaccio were last seen at the highest level in 2014, when a three-year spell in the elite came to an end. They had started that campaign with former Italy star Fabrizio Ravanelli as coach but he was soon sacked and they ended the season bottom of the table and with just four wins.

There have been struggles at the wrong end of Ligue 2 since then for the red and whites, while other Corsican sides have come and gone from the top flight. SC Bastia had a couple of mid-table finishes and were Coupe de la Ligue finalists in 2015. Tiny Gazélec Ajaccio had a one-season sojourn in Ligue 1 in 2015-16 and Bastia were then relegated in 2017. Both of those clubs dropped out of the professional ranks altogether, although Bastia are now back in Ligue 2.

Ajaccio, meanwhile, have been rewarded for keeping faith in long-serving coach Olivier Pantaloni as they roared to second place in the season just finished, four points behind champions Toulouse FC and a point clear of AJ Auxerre in third.

Pantaloni, the 55-year-old Corsican native who spent the bulk of his playing career at the club, oversaw their last promotion-winning campaign in 2011 and then kept them in Ligue 1 the following season before leaving. However, after a brief spell as coach of Tours, he returned to Ajaccio in November 2014, just a few months after their relegation back to Ligue 2.

There had been some lows and some highs since then, with the team finishing third in 2018 and losing to Toulouse in the promotion/relegation play-off final. They were third again in 2020 when the season was curtailed early due to the pandemic, and there were no play-offs that time. A year ago they finished down in 13th, but the club kept faith in Pantaloni and they have been rewarded.

Ajaccio hauled themselves over the line thanks to a superb run-in which saw them lose just one of their final 14 matches, winning 10. Remarkably they were promoted despite scoring just 39 goals, compared to 82 for champions Toulouse and 61 for Auxerre who came third and went up in the play-offs.

They scored the fewest goals of any team in the top seven, but crucially they conceded a meagre 19, giving them easily the best defensive record in the division. They kept an impressive 23 clean sheets and it is telling that the only Ajaccio player to feature in the Ligue 2 team of the season was Benjamin Leroy, the goalkeeper who will now get another crack at the top flight where he played for a season at Evian-Thonon-Gaillard earlier in his career.

Ajaccio, with their modest 10,500-capacity Stade François-Coty, are a club hardly cut out for the second tier never mind Ligue 1, and Pantaloni has emphasised the scale of their achievement.

“When you are a little club like us you start the season just hoping to secure survival as soon as possible because you know that otherwise you are likely to suffer,” he said after securing promotion. “The thing that was unimaginable, unthinkable, at the start of the season incredibly ended up happening.”

He added: “I know we are a little club. In the offices there are no more than eight or ten of us every day. We just try to do our best in conditions that are far from the best. Despite our meagre means we have managed to do it.”

Ajaccio’s top scorer was Riad Nouri with nine goals. At the age of 37 he is about to play in Ligue 1 for the first time after a career spent almost entirely in Ligue 2, the exception being a season in the Turkish second tier in 2019-20.

“I feel like it is finally my turn! Every year we have seen other teams go up and this time it’s us. It has been an extraordinary adventure. The coach has been exceptional, so have the staff, even the supporters as well,” said Nouri. “I hope to stay, although we have not talked about it yet. To stop at the gates of Ligue 1 would be a real shame.”

Building a team that can compete in Ligue 1 is now the big challenge for sporting director Johan Cavalli, a member of the squad during their last spell in the elite. There will be no marquee signings like then, when they had Mexico’s Guillermo Ochoa in goal and Romania’s Adrian Mutu played in attack.

They do have players who may be familiar to regular Ligue 1 watchers, like midfielder Mathieu Coutadeur and the former Stade de Reims forward Gaëtan Courtet, scorer of seven goals on the run to promotion. However, they will lose Gédéon Kalulu, the Congolese full-back who is joining FC Lorient. President Christian Leca is stepping down too, but said he will remain “a faithful supporter”, no doubt hoping Pantaloni’s team can survive back in Ligue 1. In a season where the bottom four will all go down, that would be another remarkable achievement.

>> All you need to know: AJ Auxerre 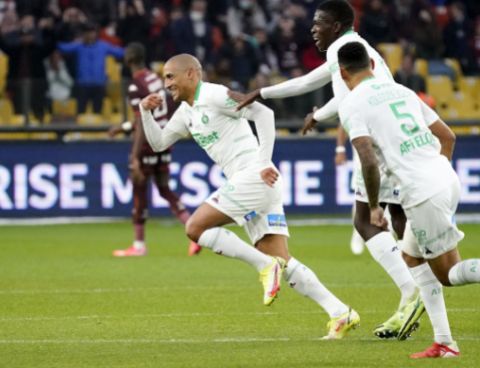 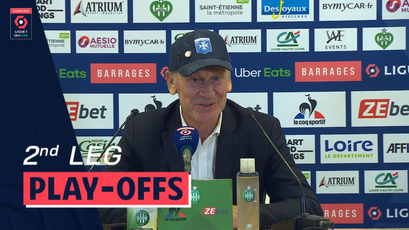