Mbappé on his 100: 'Another step into history'

The remarkable Kylian Mbappé racked up another career milestone on Sunday evening as he became the youngest player to 100 Ligue 1 Uber Eats goals.

A double in the champions' 4-2 win at Lyon saw Mbappé bring up his century in only 142 top division matches. At 22 years, three months and one day, the world champion reached the landmark more than a year faster than Hervé Revelli, the previous record holder, who sped to the mark with Saint-Etienne in 1969.

Mbappé, who went off in the second half at Groupama Stadium as a precaution with an ankle knock, put in a wonderful performance at PSG's title rivals, making up for having gifted lowly Nantes a goal in the champions' loss at the Parc des Princes the previous week.

Speaking to Canal+, Mbappé said: "It was a good day to score the 100th league goal as I knew I was two goals away. I wanted to score the goals in the previous game but instead of that I gifted a goal to Kolo Muani so I needed to make up for that. It's another stage in my career, another step into history.

"These are things that stay with you. The road continues, it has only just started. I still have many years left in front of me in order to perfect my game and to improve, and things can only get better."

Signed from Monaco in 2017, Mbappé's current PSG contract expires in 2022. The capital club's sporting director Leonardo said: "When you see Kylian's latest performance and his number of goals, reaching 100 goals at the age of 22 is something incredible. It's not the day to be talking about his contract. As we've already said, we're going to come to a point when everything concerning his future will become clearer."

With PSG back in pole position with eight league games to play, Mbappé is on course for his fifth Ligue 1 Uber Eats title in as many seasons, having already won the league once with Monaco and three times with PSG. The French international is also aiming to finish the season as the top scorer in Ligue 1 Uber Eats for the third consecutive season, having netted 33 times in 2018-2019 and 18 times in 2019-2020. Mbappé's double at Lyon moved him onto 20 goals for the current campaign, a huge six clear of OL captain Memphis Depay.

Though PSG haven't had it all their own way in the league, this could yet turn into Mbappé's greatest club season. Mbappé's four goals over the two legs against Barcelona sent PSG into the Champions League quarter-finals, setting up a rematch of last season's final with Bayern Munich. Mbappé came off the bench to score twice against Lille in the Coupe de France Round of 16 as the club's defence of that trophy goes from strength to strength.

MBAPPE: THEN AND NOW

Kylian Mbappé scored 16 Ligue 1 goals for Monaco before moving to Paris Saint-Germain in the summer of 2017.

Mbappé has 84 Ligue 1 goals and counting for Paris Saint-Germain. 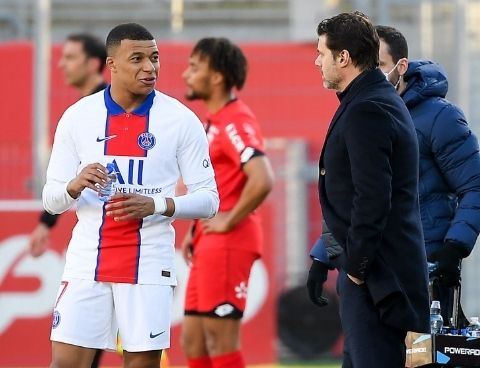