Monaco get back to winning ways in Angers

Kevin Volland contributed a pair of assists as AS Monaco picked up their first Ligue 1 Uber Eats win in five attempts with a 3-1 triumph over Angers SCO at the Stade Raymond Kopa.

The principality side beat Real Sociedad in the UEFA Europa League recently, but Niko Kovac's side hadn't secured a domestic win since the end of October, when they overcame Montpellier Hérault SC 3-1 at the Stade Louis II.

Myron Boadu was picked ahead of Wissam Ben Yedder to lead the line, and repaid Kovac's faith midway through the first half when he picked up possession from Volland and lashed home his first Ligue 1 Uber Eats goal (25'). The visitors then carried a 2-0 lead into the break Boadu dummying Volland's low cross into the box, leaving Sofiane Diop with a simple finish (45').

The second half was only 10 minutes old when Angers pulled one back, Azzedine Ounahi skinning four Monaco defenders before his shot ricocheted in off an unfortunate Alexander Nubel (55'). Axel Disasi had the final say, though, meeting Aleksandr Golovin's deflected post at the back post (73') to seal the 3-1 win.

There were goals galore on the other side of the country, with RC Strasbourg Alsace getting the better of Girondins de Bordeaux in a seven-goal thriller at the Stade de la Meinau.

Bordeaux opened the scoring through Hwang Ui-jo (7'), but then the floodgates opened at the other end. Adrien Thomasson (22'), Kevin Gameiro (pen. 43') and Ludovic Ajorque (45'+1) each plundered goals before the first half was out. Dimitri Liénard put the game beyond any doubt soon after the restart (49') and although Alberth Elis pulled another one back (57') there was no surprise when Ajorgue completed his brace (65'), Le Racing making it five games without defeat in fine style.

Montpellier Hérault SC pulled back into the top half of the table - provisionally at least - with a 3-1 win away to FC Metz at the Stade Saint-Symphorien.

After a dogged start to the game, Téji Savanier (36') and Stephy Mavididi (45') got La Paillade on their way, the former steering home a magnificent free-kick before the latter hit the hosts on the counter when they were looking for an equaliser. Elye Wahi sent Montpellier clear after the restart (48'), rendering Nicolas de Préville's late strike (70') little more than a consolation.

Stade Brestois 29 kept up their incredible winning streak in Ligue 1 Uber Eats, meanwhile, their 1-0 triumph over AS Saint-Étienne making it five wins on the bounce - a league-wide best run.

Romain Faivre got the only goal of the game at the Stade Francis-Le Blé, his second-half penalty (64') his sixth goal of the season. Les Pirates - 18th as recently Roud 12 - now find themselves in 11th.

ESTAC Troyes also got a win on the board - their first after four games without victory, the last three of them defeats - beating fellow strugglers FC Lorient 2-1 at the Stade de l'Aube.

Renaud Ripart opened the scoring for the hosts inside the first 10 minutes, finishing first time from a Tristan Dingomé cross (7'). Dingomé then teed up Rominigue Kouamé for another (34') and Laurent Batlles's men were content to defend their lead from there. 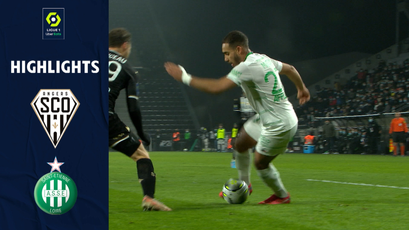