Andreas Cornelius scored late at the Stade Matmut Atlantique (77') as Girondins de Bordeaux escaped with a hard-earned 1-0 win over ten-man Dijon FCO to pull into the top half of the table.

Bordeaux began the day in 12th, six places and eight points better off than Dijon, but it was their visitors who got off to the better start. Kwon Chang-hoon whipped a wicked corner in for Cédric Yambéré, and the former Bordeaux centre-back would have opened his account for the season had his header been a matter of inches lower (4'). Yann Karamoh had a shot at the other end which was palmed away by Bobby Allain (18') before Júlio Tavares had a gilt-edged chance to give Antoine Kombouaré's relegation-threatened side the lead. The Dijon captain was denied by his counterpart Benoît Costil, though (29'). Karamoh (31') and Tavares (33') exchanged chances before Dijon midfielder Romain Amalfitano was given his marching orders for a wild challenge on Jimmy Briand (35'). Jordan Marié duly replaced the more attacking Naïm Sliti (38') and Dijon managed to stay on the front foot, with Tavares and Kwon each going close in quick succession at the end of the half (42').

Kalu and Cornelius to the fore

Ricardo Gomes must have had some firm words for his side at the interval as they came out for the second half playing at break-neck speed. Samuel Kalu did brilliantly to dance past three markers on the edge of the Dijon box, but the Nigerian's shot didn't do the skill that preceded it justice (50'). Bordeaux introduced fresh attacking legs for the final half-hour, with Cornelius and Toma Basic entering the fray (63'), and they were the next to threaten. Yambéré's attempted clearance of a Kalu cross looked bound to be an own-goal but Allain reacted magnificently to stop the ball on the line (67'). Bordeaux finally pulled ahead after Kalu's quick feet created space for Cornelius to tap home his third goal of the season (77'), before sitting back and defending the 1-0 lead until the final whistle.

Cornelius may have got the winning goals but that Bordeaux didn't have more egg on their faces at full-time owed much to their captain, Costil. The former Stade Rennais FC stalwart dominated his box, reducing Tavares, Kwon and Co. to quivering wrecks whenever they got close to his goal. How the 31-year-old has only one France cap to his name is anyone's guess.

They were made to fight for it, but Bordeaux managed to preserve their undefeated home record against Dijon. Les Rouges have never won in Bordeaux, their best result there a 1-1 draw back March 2012 when Les Girondins were still playing at their Stade Chaban-Delmas. 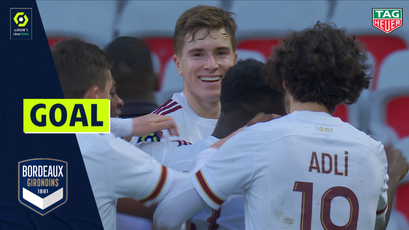