Kylian Mbappé urged French football to get behind their teams after PSG's 2-0 win away to Man United in the UEFA Champions League last 16. Coach Thomas Tuchel urged vigilance ahead of the cubical return leg in Paris on 6 March.

Ole Gunnar Solskjaer (Manchester United coach): "Today is a reality check for us. Mountains are there to be climbed, you can't lay down and say this is over. We will go there, play our game and improve from today. They had the momentum after the first goal and controlled the game. You could see we hadn't played at this level for a while and we will have to learn. It was an experience that can go either way, it's not going to be a season-defining one, it's one we have to learn from."

Thomas Tuchel (Paris Saint-Germain coach): "We're only at half-time in the tie and we have to be ready for the second half. We know we are capable of winning, but they are capable of winning in Paris as well. That's what sport is all about, particularly when we are playing football and in the Champions League. We cannot rest on our laurels and start thinking about the quarter-finals as it is only half-time in the tie. It's 2-0, a good result, but only at half-time and no team have ever got through after one leg. We have to be ready to work hard with the same approach and mentality, working hard together, to be well prepared and to put ourselves in a good position to win again. Now of course we will enjoy this but tomorrow we start preparing for the game against Saint-Etienne and then the game against Manchester United."

Kylian Mbappé (Paris Saint-Germain forward): "It wasn't perfect but it was pretty good. Perfect comes after we qualify. It was a brand-new system. We weren't used to it; there were lots of midfielders and relatively few forwards and it took us a little while to get used to it. We came out better in the second half. [Coach Thomas] Tuchel told me it would be different, that I wouldn't see so much of the ball. It was tough as I'm still learning in this position [centre-forward] but I'm not frustrated. People need to stop fear mongering. Football is played on the pitch. Neymar and [Edinson] Cavani are ultra-important but people need to be supportive. We want to French football to go as far as possible in European competitions. People should get behind us; we will be supporting Lyon next week. We need to stop being scared." 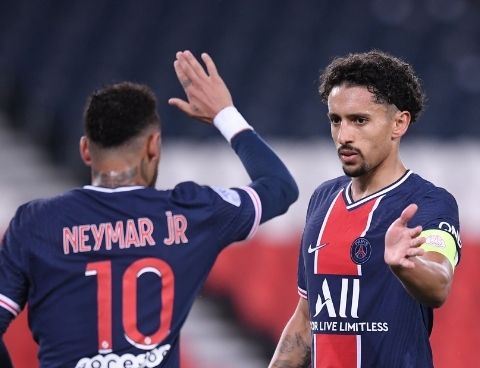