AS Saint-Etienne continued their charge towards Europe as Mathieu Debuchy netted twice in a 3-0 win over Girondins de Bordeaux on Sunday.

Saint-Etienne controlled this game throughout but did not make their dominance count until after the break. Before that, Wahbi Khazri had come closest to scoring in the first half at the Stade Geffroy-Guichard with a powerful shot just prior to the interval that was saved by Benoît Costil low down at his near post.

However, Les Verts were handed the chance to take the lead soon after the restart when Sergi Palencia handled inside his own box. Referee Ruddy Buquet did not initially point to the spot, but changed his mind after a VAR review. Former Bordeaux star Khazri stepped up to send Costil the wrong way from the penalty spot for his first goal since January and his 13th of the season (55').

Sainté then doubled their lead in the 74th minute as Khazri swung in a corner from the left and Debuchy rose to head home from six yards out for his third Ligue 1 Conforama goal of the campaign.

Debuchy was not finished there as he wrapped up the points for the home side in the 90th minute. Another left-wing corner was this time played short and the ball came to substitute Pierre-Yves Polomat, whose cross was diverted in by Debuchy at the near post.

That is now three wins and a draw from their last four outings for Jean-Louis Gasset's Saint-Etienne side, as they reclaim fourth place from Olympique de Marseille and, crucially, move to within three points of their great rivals Olympique Lyonnais in third.

The UEFA Champions League dream remains alive for Les Verts, while this was a first defeat for Bordeaux since the appointment of Paulo Sousa as coach last month. The decison to hand top-flight bows to 19-year-old Till Cissokho and Alexandre Lauray, 22, did not pay off.

An afternoon to remember for the 33-year-old against the club he represented during a loan spell in the 2015-16 campaign. Debuchy's unlikely brace saw him double his goals tally for the season. It was the first brace of his career in Ligue 1.

This was the 114th top-flight meeting between these clubs. That makes this the most-played fixture in the elite. Saint-Etienne have now 40 of these encounters, with 43 for Bordeaux and 31 draws. 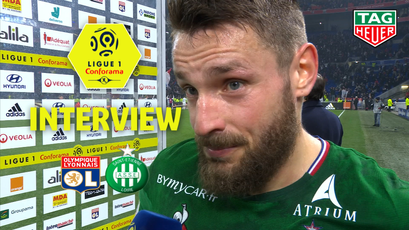