Reims were held 2-2 at home by Caen. After Reims equalised in the second half, Caen goalkeeper Brice Samba stood firm to deny the hosts all three points.

This was the first point Reims had managed at home to Caen in the top flight and it came at the third time of asking. Caen followed up their last-gasp win over Toulouse on Tuesday with another positive result, although Fabien Mercedal's side will regret not being able to hang onto their 2-1 lead.

Moussa Doumbia (6') had a a goal for Reims disallowed as Hyun-jun Suk was in an offside position but the giant South Korean made amends (8') as he neteed the opener. Jessy Deminguet miscontrolled and Suk pounced, advancing before placing a shot beyond Brice Samba.

Mathieu Cafaro's outstanding free-kick winner against Strasbourg had been the goal of Week 18 and the Reims player found the target (17') only for Samba to make the save. Caen equalised (28') as Younis Abdelhamid succeeded only in diverting Yoel Armougoum's cross Casimir Ninga's way. The Chadian forward headed home.

Samba saved from Doumbia (32') and Caen took the lead (45') when Saif-Eddine Khaoui allowed Ninga's cross to run to Enzo Crivelli and the big forward curled in a left-footed finish. That Caen were level at half-time was down to a superb double save by Samba from Cafaro and Rémi Oudin (45+2').

Bjorn Engels (53') equaised with a header from a Xavier Chavalerin set-piece and after that it was the Samba show as he saved twice from English sub Sheyi Ojo (61' and 87') before denying a deflected Abdelhamid effort (88') and then tipping a header from the same player over the bar (90').

In his first season as the club's number one goalkeeper following the retirement of Rémy Vercoutre, Samba has been ever-present. The former Olympique de Marseille custodian put in arguably his best top division performance, making numerous high-class saves to ensure Caen left Champagne country with something. 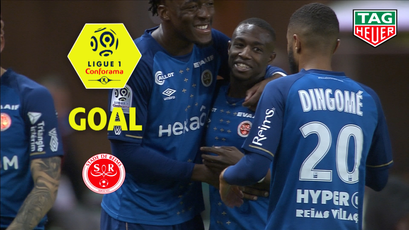