Both coaches were satisfied with a point after SM Caen and Toulouse FC drew 0-0 in their rescheduled Ligue 1 Conforama Week 33 clash at the Stade Michel d'Ornano on Wednesday night.

Patrice Garande (SM Caen coach):  "It's a point won. They played the match I thought they would, on the counter, but I found that we controlled things well. We didn't create many chances, but my players were focused and committed, giving their all. Defensively, we're solid. I liked what I saw in terms of attitude and our style of play, but we just weren't effective enough."

Mickaël Debève (Toulouse FC coach): "It's always a point won when you're battling against relegation. We couldn't get the win tonight. We've been defensively solid for two matches now, but we need to give more in attack. We weren't effective enough, but we continue to make progress. Tonight went well, and psychologically, it did us good. If we can maintain this level of performance, we will be in with a real chance of saving our skins."

Unai Emery (Paris Saint-Germain coach): "I'm very happy tonight. The championship is the competition that demands the most consistency throughout the season. After the loss to Real Madrid, the team bounced back well. We showed our strength. We want to keep growing and continue writing our history, here in France and in Europe. The players were very focused tonight. They gave it everything for 90 minutes, to keep scoring goals and to keep defending. Now we turn our attentions to Wednesday's semi-final of the Coupe de France away to Caen."

Leonardo Jardim (AS Monaco coach): "It was a very bad game. A nightmare. We lost almost every challenge. We conceded when we were sitting deep and we were caught out by balls in behind or from set pieces. Worse than losing is the way we lost. Nothing went right. I think this is the biggest defeat of my career. In my mind, it'll leave a mark. The reality is that to get to the very top, we all have to do more, from the players to the staff. We need to work hard to secure second place."

Michel Der Zakarian (Montpellier coach): "We had everything to be go fifth, but we didn't take our chance. We're still in the fight, with an extra opponent: Bordeaux are now in the running. We're disappointed, but we'll get our heads right and be ready for the next round. Some players didn't play as well as I expected them too. It was my choice to take Jonathan Ikoné out."

Gustavo Poyet (Bordeaux coach): "We really deserved our win. We tried something different against a team playing three at the back and we found the key to hurting them. It was a great pleasure for the players that it worked. It's been a long time since we played so well. It's an interesting option going forward. Last time I talked about Europe we went six games without a win! So, I'm not talking about it. We have to end the season in a way which the fans deserve."

Jean-Louis Garcia (Troyes coach): "It's difficult to accept. Not so much losing to Marseille but the manner of the loss. My team showed character and will power. We led twice. Unfortunately, we were undone by individual errors. We couldn't find a third goal to put them away. It's a shame, but we're still in with a chance and we won't give up even if this result was painful."

Rudi Garcia (Marseille coach): "We played a match on Thursday that cost us physically [OM beat RB Leipzig 5-2 in the UEFA Europa League], so it's a great result. We went behind twice but we moved mountains. This team has huge talent. It was a real team victory. The team is doing great things but we have to keep it up until the end of the season. I'm liking this squad more and more. We can do something great but we haven't won anything yet."

Bruno Genesio(Lyon coach): "The most important thing was to win. Scoring three goals and having lots of chances against a team that doesn't usually concede many was a plus. There are still five games to play including a very difficult one at Dijon on Friday. Nothing has been decided yet and we'll have to stay very motivated and focused in order to hold onto third place. The win at Marseille really kick-started something in the squad but we have to stay humble."

Serge Gakpé (Amiens attacker): "We're disappointed. We knew they're effective on the counter and they scored the first goal like that. We conceded three and that's a pity. We were too timid in the first half and watched them play. 3-0 is a fair result in the end. We're really close to securing our Ligue 1 status but to seal it we need another win and we'll try to get it on Saturday at home."

Christophe Galtier (Lille coach): "Will we get over giving up the draw at the end? I don't have the answer to that. If we'd played like that more often then we'd have more points on the board by now. We conceded two late goals and we need to avoid repeating our mistakes. We're making too many individual errors and they're costing the club dearly, costing the supporters. We're affected by it, I'm not going to lie. But we're not down and out and we still have hope."

Antoine Kombouaré (Guingamp coach): "I'm happy for the players. They believed in themselves right until the end. I was very disappointed with the way we played as we never got going and they were more committed than us. Lille were fighting for their survival and I expected more from my team. It was a miracle we got back on terms. It's very tough on Lille but if they're where they are in the table there's a reason behind it."

Thierry Laurey (Strasbourg coach): "We did everything we needed to in order to win and the only thing I can criticise my players for is that we didn't score. We were out of luck and deserved at least a point. It was cruel to concede eight minutes from time. It's difficult for us at the moment as the treatment room is full. We have a united squad and that will help us to stay up. I'm disappointed with the result but not the display."

Jean-Louis Gasset (Saint-Etienne coach): "It wasn't far off being a hold-up but when you've got a great goalkeeper and a defender who never gives up and keeps popping up with decisive goals, well it shows we have moral fibre. Strasbourg deserved better but either they came up against our goalkeeper or were wasteful with their finishing. There are five games left and we need to take risks to win them. Playing as we did here won't be enough."

Claudio Ranieri (Nantes coach): "It wasn't easy having to make two early changes because of injuries. We played without confidence and at the end of the day I was happy with the point. We made a lot of runs wide without giving the ball to the forwards. A lot of teams are better than us and have a greater chance of qualifying for Europe. We need to keep fighting and we will fight until the end."

Olivier Dall'Oglio (Dijon coach): "I think we played well and I'm happy with the draw. In terms of the quality of our play I think it was our best away display of the season. We played it out of defence well and looked after the ball. Our players took risks and tried things. We're ahead of where we expected to be at this stage of the season and there's no question of us giving up on anything even of we are short of many players."

Sabri Lamouchi (Rennes coach): "I have trouble explaining this defeat. We started well enough and opened the scoring, although overall I wasn't happy with the first half. We should still have killed the game off but then we lost it in three second-half minutes. Things are fragile and as soon as we move away from the values that allowed us to get good results we end up with a performance like this one."

Frédéric Hantz (Metz coach): "After being humiliated at home by Lyon we came here at the end of a difficult week to take on a form team. The victory is beautiful and are attitude was much better, something that will be important through to the end of the season. We've often led in recent games and it was good that we held on this time. The hope is still there, although the hope is small it has been reinforced by this victory."

Stéphane Moulin (Angers coach): "This is an extra point that helps us turn back the clock. This point feels like a win because our opponents were tough, a high-calibre team. For me, as a group, they're one of the best in Ligue 1. It's difficult to upset them. We had courage and never let go. We changed our system to get the equaliser. We were able to steal a point and that's good for the future."

Lucien Favre (Nice coach): "It's a shame, because we could easily have taken all three points. This game had to finish 1-0. That didn't happen and it's our own fault. We kept pressing after the first goal and had lots of possession, but we made bad choices, took risks when we shouldn't have, and it cost us. We must stay positive. Out of the running [for Europe]? We aren't giving anything up." 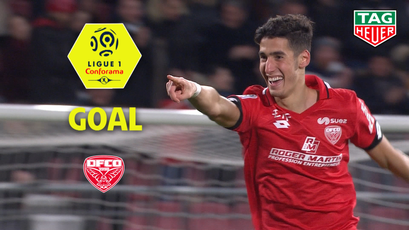