Welcome back Lorient and Lens!

FC Lorient and RC Lens will be back in France top flight for season 2020-21, the legendary Ligue 1 Conforama clubs having earned promotion after placing respectively first and second in Domino's Ligue 2 on a points-per-match basis.

Brittany outfit Lorient - Les Merlus - are set to make their return to Ligue 1 Conforama after a three-year absence, Christophe Pélissier's men having edged out RC Lens by a single point - and third-placed Ajaccio by two - in the race for the Domino's Ligue 2 title.

It's the first national title won by the club since they clinched the National (D3) title all the way back in 1994-95, and Pélissier - who has won promotion seven times as a coach, including taking Amiens SC to Ligue 1 Conforama for the first time in club history - was suitably thrilled.

"We're happy because we were in the top two on the table for 27 out of the 28 rounds this season - that gives the result a certain porting legitimacy, even though we'd have liked to be out on the pitch right up to the end so we could celebrate this title at Le Moustoir in front of our fans," said the 54-year-old whose side topped the attacking charts with 45 goals - 15 of which came from top scorer Yoane Wissa. "That's the thing we're missing right now and what we want to do too. The day we can do that, over and above winning promotion, it will mean we've beaten this virus. That's the most important thing to remember. It brings a bit of joy, but of course that joy is contained in this difficult moment."

Lens back in focus

Meanwhile northern giants Lens will also be making the step back up to the big show, returning for the first time since suffering administrative relegation at the end of the 2014-15 Ligue 1 Conforama season.

"I don't know what Racing's next season will be like next. It may be just as difficult, but I hope it will be a good one. But right now, we're going to enjoy the fact that Racing Club de Lens are back in French football's elite," said Haise, who is keen to turn his interim appointment (two wins from two matches) permanent after taking over from Philippe Montanier in February. "If I told you otherwise, I would be crazy. I'm not crazy. The coaching staff and I very keen to experience Ligue 1 Conforama with RCL. Now, the answer lies with club management, and I'm listening. We'll discuss it in due course."

Congratulations FC Lorient and RC Lens - see you in Ligue 1 Conforama in season 2020-21! 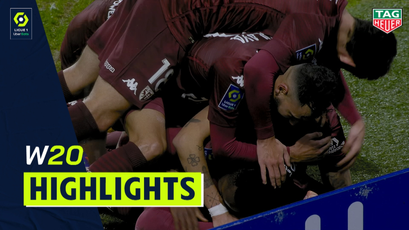